On Tuesday, coming home from a long day at work, I got an email off David with a link to the Daily Mail Online: It was an article on Lily the Red Panda and David’s pictures of her taken two years ago as she came out of the den with Lushui her mum. 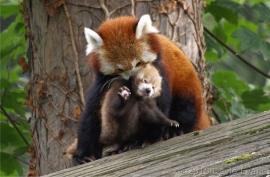 David also informed me that his pictures were to be in the Daily Mirror and the Times the very next day! I planned to get copies but nothing prepared us for what came next!

Arriving at work the next day David was met by a colleague who said that they had not only showed the article in the Daily Mirror on ITV’s Daybreak, but they had also mentioned David and I. 😀

Last year David was approached by Solent News about his Red Panda pictures on Flickr, he gave them interview details about how we got one of the first pictures of Lily and some information regarding these beautiful but endangered animals. It is well over six months since hearing from this press company who will split the proceeds 50/50 with David, and we forgot about it, until all the pictures and articles started appearing in the press. It could be two years too late for the news, as Lily is now settled at her new home in Norden’s Ark, Sweden, but it means our names will be inextricably linked to Lily’s name!

UPDATE: David has just emailed me saying the article has now gone to India! http://www.cityjournal.in/Newspaper/20120511/Cocktail/Cocktail_2.html