The news I awoke to this morning was that Lily, the Red Panda who was born at Chester Zoo in 2010 and subsequently moved to Sweden’s Norden’s Ark Zoo, has now become a mum herself! I was so overwhelmed! What lovely news! It is a shame I live so far from Sweden, I would so love to visit her and see her with her babies. 😀

More Red Panda news and also a son of Lushui and Pali (their legacy lives on!), and brother of Lily has also bred successfully at Cotswolds Wildlife Park.

House news, and yesterday (Monday) we got a call from Chestnut saying that they were not coming next week to do the work but this Wednesday! I was shocked! Today, the men with the scaffolding came. They parked outside our house at 9am and did not get out of their cab until after 9.30am! Talk about dragging time out a bit! lol 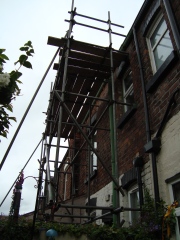 They worked from 9.30am until 1pm-ish! Now as David put it, the house has braces on LMAO! 😀 Maybe things house wise are starting to move forwards. 🙂

Garden bird news: The Dunnock was spied yesterday evening, hopping about the yard gobbling up the scraps that the male House Sparrow (I’ve named Jack) was dropping as he attacked the fat balls! 😀 I am happy to report that the House Sparrows (maybe three of them) are continuing to visit daily. Yesterday, two males and a female were spotted. 🙂

Last evening, about 7.30pm there were up to 10 Goldfinches and two Blue Tits on the feeders. Even one of the baby Goldfinches was begging for food. I had thought that we had seen the last of the begging birds, but I was wrong. 🙂