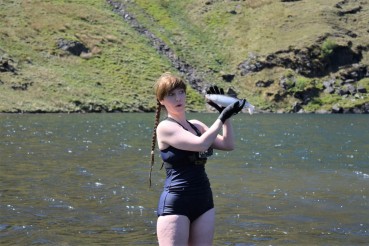 Bowscale Tarn was the clear winner of my public vote on where my first swim of 2017 should be. Despite that accolade finally going to Crummock Water, I decided Bowscale would be my second!

As featured in William Wordsworth’s 1888, Song, at the Feast of Brougham Castle. Folklore states that Bowscale Tarn is home to two immortal fish, one with the gift of speech. With the weather forecasting sunshine and temperatures reaching the late 20°C’s, there was nothing else for it but to go in search of these immortal fish!

We got to the hamlet of Bowscale at 9.30am after a two hour drive up the M6 to Penrith and then the A66 to Mungrisedale. As we seem to be visiting the area a lot recently, we didn’t even need the help of the SatNav!

There are only a few cottages in Bowscale and it was by these cottages that we parked the car, parking was free! As the road bends right, there is a public bridleway sign pointing towards the tarn. The path was established by the Victorians who would flock to Bowscale Tarn much more than people do now. The path was very quiet and we only saw one other person with his two dogs.

The walk to the tarn took one hour. The pathway was well defined, gravelly underfoot but there was no worry of getting lost! The sun was blazing hot, even at 10am! The sparkling blue of Bowscale Tarn appeared like a mirage, it was a welcome sight!

A good few hours was spent at Bowscale, picnicking and sunbathing, before sliding my sun kissed body into the cool waters of the tarn. I found the shallows to be very muddy and my feet easily got sucked down into the vegetation. It was a feeling I did not like!

Occasionally a mean wind wiped over the tarn and the water glistened like there were a myriad of tiny stars dancing on the surface. The silence of the place was only broken by the chatter of pipits nesting in the heath-land.

And of the immortal fish? I never seen head nor tail of them, other than wrestling with a rubber trout I had brought along for the fun of being silly!

Have you visited Bowscale Tarn? Been lucky enough to see the immortal fish? I’d love to hear of your stories attached to this place.

12 thoughts on “Tarn of the Immortal Fish”