Sorry this post is a bit late. I’m still trawling through the backlog of planned blogs for the end of 2018!

I aimed to read 40 books by the end of the year, and I can happily say I reached my target, by reading 41. Thanks to Laura at Circle of Pine Trees for creating the challenge. For 2019 I will keep the target at 40, which I think is a manageable figure. Do you fancy joining in?

Below, find reviews of the books I read in the final quarter of 2018. What books have you enjoyed this past year?

The Girl in the Spider’s Web – David Lagercrantz

I enjoyed the Girl with the Dragon Tattoo trilogy, so imagine my surprise when I found they had rekindled the series. It may be written by a different author but the same cast of characters feature. Although the plot is a slow burn the narrative soon picks up and races through to the end, leaving the reader breathless. I would have loved more Salander in the story but nonetheless it’s a good start to the continuation of the series.

Have you read the two new sequels? What were your impressions?

The Girl in the Spider’s Web David Lagercrantz

After You – Jojo Moyes

I enjoyed Me Before You and even laughed/cried at the film. So I purchased the sequel After You. However the story was not as good as the original. It followed Louisa Clark coming to terms with life after Will. There was still moments of joviality interlaced with poignancy but it didn’t pack as much punch as the first book. I will probably read the third installment once it comes out in paperback.

Have you seen the film? Do you think it kept true to the novel?

The Comfort of Strangers – Ian McEwan

Why, why, why do I keep doing this to myself? I keep subjecting myself to the dull, banal writing of Ian McEwan! Again I was disappointed in yet another of his novels. I can’t recall much of the plot which I found rather vague. The third person narrative really detracts from the reader caring a jot about the characters and the horrors that happen to them. The plot, a couple holidaying abroad befriend a man who invites them back to his home where they meet his crippled wife. I had heard a radio adaption of this book in the 90’s which I found deeply unsettling. However the book I just found boring. 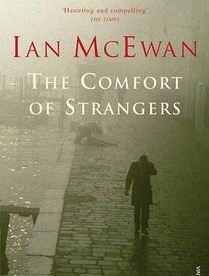 The Comfort of Strangers

The bad writing just continues I’m afraid with this depressing post apocalyptic novel. A film was also made starring Viggo Mortensen. If the film is anything like the book, then I’ll pass. The plot is of a father and his son travelling a road to the coast after the world has been decimated by some kind of cataclysm. Anguish and misery pour from this novel in floods. Reading scene after scene of human desperation in a ravaged world devoid of food and warmth is hard to stomach. The conclusion leaves the reader unsatisfied and I wonder if the ulterior motive of the author was to depress his audience? I was shocked to read that the book won a Pulitzer Prize!

Maybe you had a different experience of this novel?

My choice of books were not going well this quarter. I decided to try another book that has been adapted for film and which again I’ve not seen. The issue I had with this novel was not the plot, which was rather twee but the language. I found that it seemed too modern for the 1950’s. The plot, a writer comes from London to Guernsey to research the German Occupation and in the process finds herself among a colourful cast of characters.

Have you read the book? Seen the film?

One Day in December

The Literary and Potato Pie Society

One Day in December – Josie Silver

I really wanted to like this book, I really did. The advertisement for the book kept popping up on my Instagram with rave reviews. So I downloaded a copy. The premise, a girl on a bus makes eye contact with a boy whom she looks haphazardly for over a year until she eventually meets him but there’s a catch. I won’t ruin the plot for you if you enjoy rom-coms but I felt rather bored with the characters and the sugary sweetness of it all.

Perhaps you felt differently if you’ve read this book?

The Girl Who Takes an Eye for an Eye – David Lagercrantz

I seemed to get into this second sequel to the Girl with the Dragon Tattoo trilogy much quicker than the first. The characters were more detailed and the story I felt was much better than the first Lagercrantz uptake of the series. Salander featured much more and the plot was fast paced. Its not a patch on the Stieg Larsson originals but I enjoyed it none the less.

Have you read this book? What were your impressions?

I’m struggling to find books for 2019 that really grasp my interest. Have you any suggestions on books you think I would enjoy?

Thanks for visiting and happy reading!