Two weeks ago I blogged about taking Riley to Crosby Beach and Sir Anthony Gormley’s Another Place. You can read the first installment here.

This May bank holiday Monday dawned wet and miserable, (as is usually the norm!) I did not want to stay stuck indoors at home, however warm I would be. I wanted to have an adventure, getting wet and sandy would be par of the course! 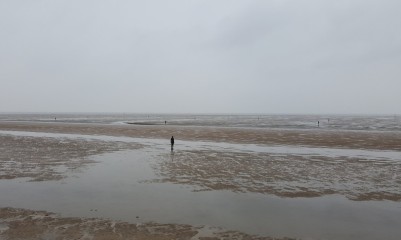 I managed to get David to agree on another trip to Crosby Beach, even if it was drizzling. Riley was excited to tag along! Indeed he was sitting at the front door waiting for me to come and collect him! 🙂

The journey to Crosby Beach, and the coastguard car park took 30 minutes from Liverpool. I thought the journey would never end. Poor Riley get’s car sick and it was something I was hoping to prevent.

Finally we arrived under a grey leaden sky. The tide was out but the rain showered down like arrows! We paid £1 for two hours. It seems all the car parks are pay and display now.

The car park is only a stones throw from the beach and it was not long before Riley’s lead was off and we were running across the wet sand, throwing the ball for Riley to chase.

We got soaked to the skin, Riley even more! Let’s just say we had to give him a bath afterwards! 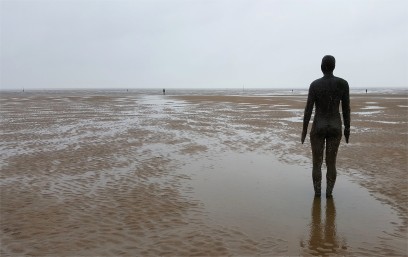 The figures of Sir Anthony Gormely’s Another Place were even more atmospheric in poor light and bad weather. Somehow they looked wistful.

I took my GoPro along with me and filmed Riley having fun. Below is a montage, I hope you enjoy!

I’m sure another trip will be on the cards in future!

No sooner had I published Sunday Sevens #15, when more pet news occurred.

It was a lovely start to the week, with bright warm sunshine (much needed if you ask me!) When it is warm I like to sit out in the yarden, I take Artie with me. Being outside gives him more stimulation than being stuck inside the house. However I have created a nature yarden, meaning I have lots of visiting bees and butterflies, lots of stalking opportunities for Artie! While I was digging up my second crop of maris bard potatoes for my vegetarian roast dinner that evening, Artie was sitting amongst the flowers watching the bees. 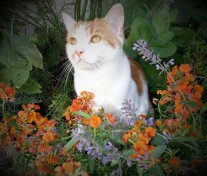 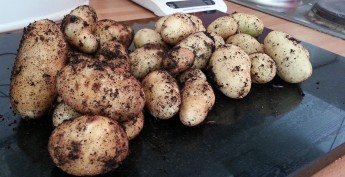 I acted too slowly. I was busy marvelling at all the potatoes I had grown! From the corner of my eye I saw Artie lunge at a bee who had entered a foxglove. He must have knocked the poor bee down into the foliage as I couldn’t see her. I left Artie sniffing in the undergrowth while gathering my harvest.

On coming back into the yarden, Artie suddenly darted from the greenery, rubbing his paw against his nose. Jumping about like a jack in a box ‘You’ve been stung!’ I cried, scoping him up and taking him into the house. I called for David’s assistance. Then proceeded, a half hour long endurance, of trying to hold Artie down while David tweezed the bee sting from his nose. I got covered in scratches for my endeavour.

Afterwards when Artie was sting-less and enjoyed some cooked chicken, seemingly none the wiser for the upset. I stood shaking like a leaf. My nerves had been shot! ‘Pets are worse than kids!’ David exclaimed while I tried to regain my spirits.

Needless to say Artie is back to his ‘wild’ self again. He is siting in the last rays of the Sunday sunshine.

Have you had a pet who has had a too close encounter with a bee? 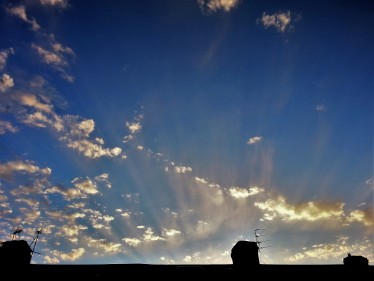 Forgive me for returning to the great British obsession, the weather, but the UK saw its hottest day of the year (so far) on Tuesday! In the NW of England the temperatures soared to a very sweaty 31°c! The Spanish Plume the meteorologists had predicted had finally arrived! Though only for three days! On Tuesday evening as I wrote my post about the numerous animal sculptures that have graced the UK’s cities, David and I sat in the hottest room of the house. Outside the window I watched as the sky darkened as the last rays of the sun dipped beyond the horizon!

During this little snippet of summer, I was out counting the butterflies that visited the yarden, in the Big Butterfly Count. The count runs from 15th July to 7th August 2016! I don’t know whether it is because the alleyway between the houses has become overgrown with wild flowers/weeds but I have seen more butterflies flutter past this year, then any other! Predominantly the most common butterfly has been the small white. There has often been two (I don’t know if it’s the same couple) twirling in their dance of attraction before the male attaches himself to the female! They are a joy to watch! 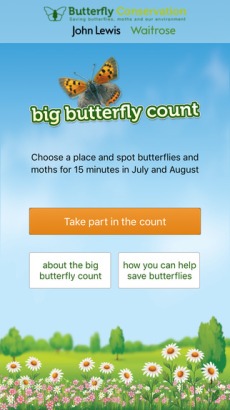 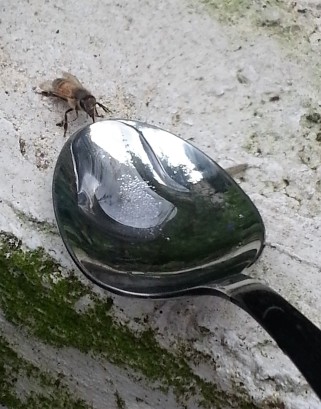 One evening David and I were giving sugar water to this tired bee when in quick succession a small white and a red admiral fluttered crazily past! I quickly noted my sightings on the phone app before watching the satisfied bee fly off energised! 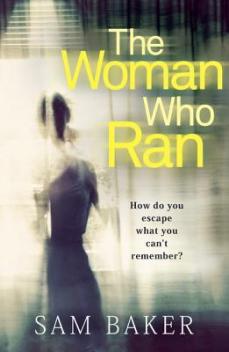 This week saw me finish my latest book, Sam Baker‘s The Woman Who Ran, inspired by Anne Bronte’s The Tenant of Wildfell Hall. At first I struggled to get into the story. It seems to me that many published novelists nowadays are or were journalists. I don’t know whether that is a good thing or not! I persevered and soon the story warmed up. The narrative was atmospheric in its description of the Yorkshire Dales. The characters were a little difficult to understand but you got to like them in the end. The finale, touted as being explosive, ended more like a whimper. I didn’t understand why the main character would act like she did in the face of opposition! Anyway, it was enjoyable. I’ve not read this author before, perhaps I will in future?

Have you read this novel? Any thoughts? 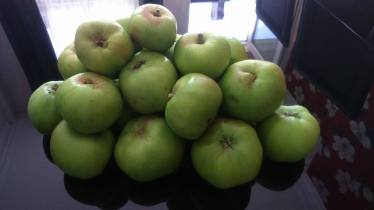 I was going to end today’s blog with an update on Troy but there hasn’t been much improvement. Then I remembered the lovely selection of bramley apples given to us by one of David’s friends. So I decided to finish with them. I have acquired all the ingredients so next week I shall be busy cooking apple pies, or variants on a theme!

I hope you all have a wonderful week ahead.

Sunday Sevens was devised by Natalie at Threads and bobbins.

Monsoon Forest, the largest indoor zoo exhibit in the UK is finally open! 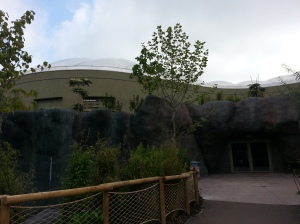 David and I decided to use what time we had left of our Chester Zoo membership, and take a day trip to see how the new exhibit had taken shape.

Monsoon Forest is part of the bigger project, Islands, at Chester Zoo and I have reviewed our preview visit here: https://redpanda08.wordpress.com/2015/07/12/islands-at-chester-zoo/.

After walking through the islands of Panay and the mysterious Papua with it’s Cassowary’s and mist.

We finally reached Sumba with it’s Lazy Boat Ride. I personally love this ride, it is so tranquil and today was no exception. While the zoo filled up with guests we sat in a boat and relaxed in the quietude of the river ride.

We saw the Visayan Warty Pigs and later on the Banteng, both enclosures look lovely!

After disembarking the boat we made our way to Bali where we watched doves and Javan Sparrows flit about freely. It made me comment that Islands is almost like a zoo within a zoo! There are many facets of Islands yet to be discovered.

Finally, it was onto Monsoon Forest! The biome is temperature controlled and the first area we entered was Tripa Forest Research Station which has views of the Orang-utan’s enclosure for when they are finally settled. 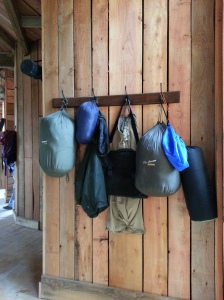 The research station was well designed and very authentic feeling. I loved the display of research papers amongst actual exhibits for the smaller insects/animals in the zoo’s collection.

Exhibit with spiders and leeches etc..

Then it was into the rainforest itself, where apparently it rains sometimes! There were no birds free flying but there will be in time! 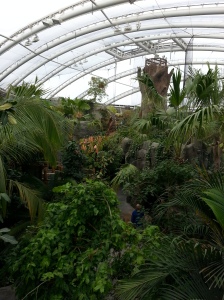 As like any other exhibit you see the animals when they want to be seen, and today the Rhinoceros Hornbill was sitting on it’s perch but the Sulawesi Macaques were fast asleep high up in their enclosure. The Sumatran Tigers have been relocated to islands but are acclimatising to their new surroundings. It will be wonderful to see them in their huge new home when it is open to the public.

There have been many pictures of the new exhibit, the Sunda Gharial crocodile but all David and I saw was the head of the animal, it’s huge body and tail was submerged under water!

We spent a good hour in Islands, this our second visit. It is an exhibit that can be visited again and again and something new would be witnessed each time. The new venture for Chester Zoo can only go from strength to strength. Also with this new land being available it is opening up more space within the zoo to bring in more species. The Sun Bear is an excellent example which will be housed in the old tiger enclosure. Something to look forward to in the future. 🙂

I celebrated it at the Red Panda enclosure of Chester Zoo, while waiting and failing to see the two baby Red Pandas. Maybe next time? 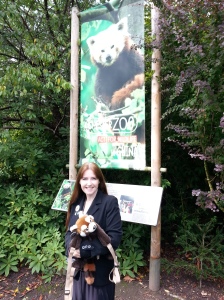 Later on while leaving the zoo and perusing their gift shop, David and I came across Roxie the Charlie Bear Red Panda, and I just had to have her for my ever growing collection of Red Pandas!