This weekend David, Riley and I went on a wild adventure to the Lake District!

It’s been a dream of mine to take Riley to my beloved Lake District. However Riley suffers badly from car sickness, which has always put us off going further afield. This year, on our travels we managed to drive for an hour with Riley being ok in the car. So we decided that with a short stop at Lancaster Services, we might just be able to get Riley to the Lake District.

So on Sunday, David and I got up at 6.30am, picked up Riley and headed north up the M6. We had chosen a low level walk to Rydal Water and Grasmere via White Moss Car Park. As the sun rose on a beautiful late autumn day we managed to drive two hours without hiccup. Riley enjoyed his break at Lancaster Services where there is a designated area to walk dogs. I don’t know if other services have this facility? We pulled into a busy White Moss car park around 9.30am.

It had been two years previously since David and I had visited the area, then I completed two fantastic wild swims. You can read about that adventure here. With Riley on lead we embarked on a six mile walk along the shore of Rydal Water, up towards Rydal Caves and then back down along the River Rothay towards the shores of Grasmere. Some three hours walking were enjoyed by us all. 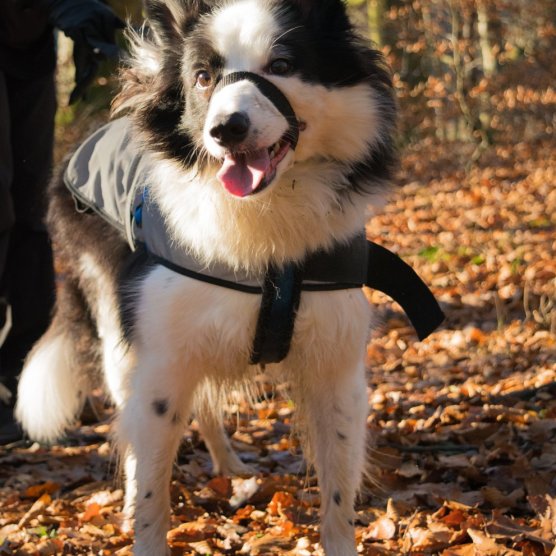 David and Riley at Rydal Water

Riley and Christine at Grasmere

At Grasmere we tried Riley in the water. At first he was a bit nervous but once I had waded in with him, he seemed to enjoy paddling in the shallows. Perhaps in time he will become my swim buddy?

Christine and Riley in Grasmere

I was so happy that we managed to get Riley to the Lake District. On the way home, he slept the two whole hours. It was all that fresh air! I hope this is the start of a new venture. I wonder where David and I will walk Riley next? Do you know of any easy dog friendly walks in the Lake District?