Ever since I started wild swimming, my desire to swim in a Scottish Loch has been like an itch I couldn’t scratch. This September, as an early birthday treat we decided to head to Fort William for a few days in the Highlands.

The journey north from Liverpool passes Loch Lomond and the Trosachs National Park via the A82. The plan for the day was to travel the six hours to Fort William with a stop off at Loch Lomond for my first Scottish wild swim! 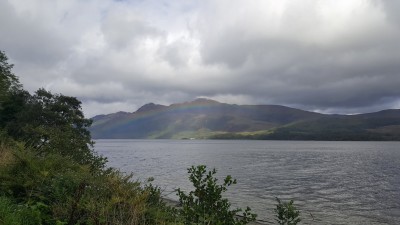 Four hours into the journey we stopped at a parking point (near Inverbeg), with views of Loch Lomond. With the amount of preparations I do now, I can’t just have a quick swim. Stripped to my swimsuit, I firstly have to inflate Doughnut and fix it to my waist. Then don my neoprene boots and gloves to protect my extremities. Also, I now have a beanie hat to help keep the heat in. Then I strap Wilson, my waterproof camera to my chest. All this I do before I even head towards the water!

Wrapped in my Dryrobe® I waddled like a penguin towards the shore. The shore I chose to embark on my first Scottish wild swim was of soft shingle, with Ben Lomond on the opposite side. The weather on the day was cloudy, but not too cold. I was prepared for frigid temperatures, but in reality the water temperature was around 14°. I can safely say I’ve swam in colder waters! 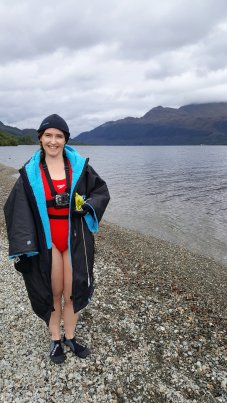 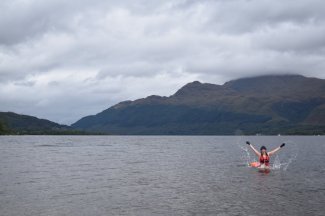 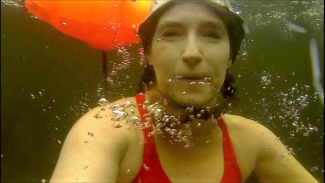 With David taking pictures and video on shore. I waded out into the water. I always seem rather nervous before I head into the water. Perhaps it’s because I don’t know what to expect from the water’s bed? Is it going to be blissful soft shingle like Llyn Cwellyn, or rocky as hell and a scramble to get in like Derwentwater? Thankfully my first Scottish wild swim was the former. The shingle beach slopped down in increments and I walked out until the water lapped around my neck.

I thoroughly enjoyed my swim in Loch Lomond. I swam back and forth along the shoreline and even managed to dunk my head for an underwater shot. Much fun was had and I really didn’t want to get out. However we had to travel a further two hours to our accommodation for the three nights stay.

We booked our accommodation via Airbnb. I had never used the website before until my friend Jennifer informed us that her European trip was booked through the website. After doing a search of the Fort William area, one accommodation seemed promising. A self catering apartment overlooking Loch Linnhe called Glenloch View. With much deliberation we decided to book, at £248 for three nights, it was cheaper than the hotels in the region. Check in was via Lock-box, so we never met the proprietor. However on arrival there was a vase with fresh cut flowers and a bag of tasty fudge for us. The ground floor apartment was clean and bright and very new. It had a lobby where boots and wet clothes could be left to dry. The living room/kitchen was open plan and had nice views of Loch Linnhe. The kitchen had an oven, microwave and fridge/freezer, and everything you needed to cook evening meals or even a cake! The double bedroom and bathroom was at the back of the apartment. There was TV with Freeview, a stereo and Internet. The apartment was very comfortable and we did not want to anything. I’ll end this post with a few pictures of the apartment. 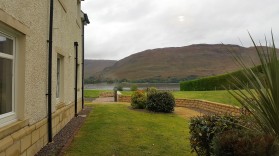 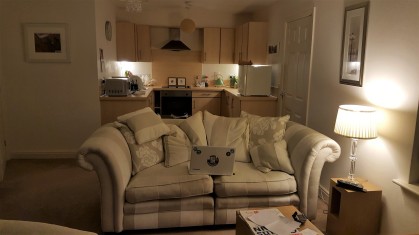 Have you stayed in Fort William? Booked via Airbnb? Even swam in a Scottish Loch/Lochan?

On our journey north towards our bed for two nights, I planned an excursion to Grizedale Forest. It was the perfect opportunity to look for the colours of autumn. However, the day dawned grey and oppressive. Indeed all weekend the weather forecast was for heavy cloud cover. 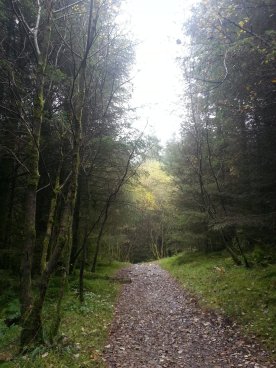 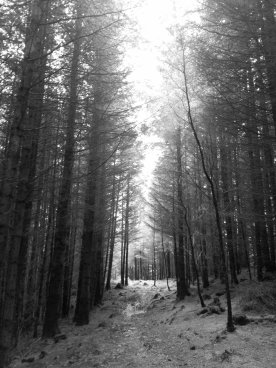 Grizedale is the UK’s first sculpture forest and while David and I walked the route towards Carron Crag we looked for sculptures en-route. 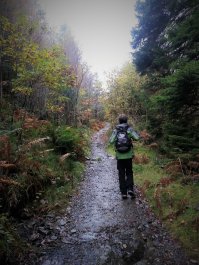 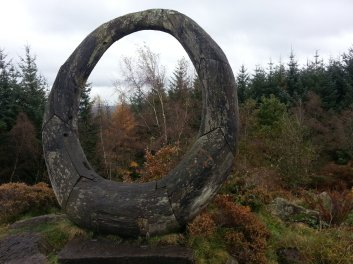 The walk to Carron Crag took two hours. There are many other walks, some strenuous, others less so. Our visit was brief but Grizedale is definitely a place to re-visit. Have you been? What did you think of the place?

Grizedale was an hours drive from our B&B, Hermiston Guest House. Hermiston is situated in the quiet village of Braithwaite, just 10 minutes drive from Keswick. On arrival we were met at the door by Helen who welcomed us inside. She carried my suitcase and showed us to our room, Skiddaw. The room was well appointed, in neutral colours with an en-suite (the shower was lovely!) The window opened to glorious views of the Skiddaw mountain range. 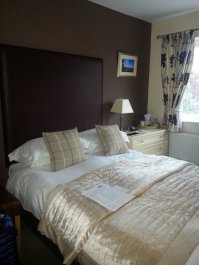 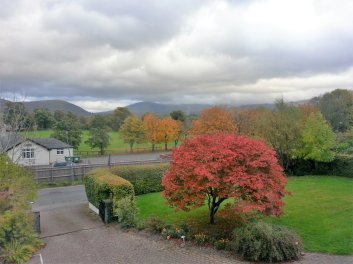 While we chatted about my wild swims over coffee, tea and cake in the guest lounge, Helen informed us that she had left me a gift for my birthday from herself and husband Phil. I was astounded by their generosity. They had gifted a bottle of bucks fizz! I was warmed by their kindness! 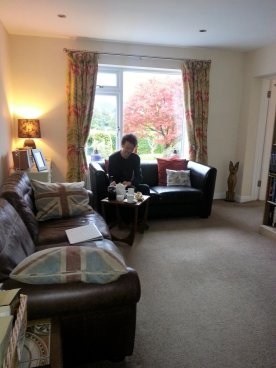 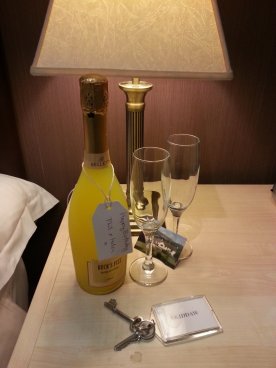 David and I had planned on an early rise the next morning, meaning we would miss breakfast. Helen offered to make me a fruit salad to take on my travels, which I kindly accepted.

Even breakfast the day after was a relaxed and friendly affair. Phil served the meals and friendly chatted to the guests, showing real interest and giving suggestions on places to visit. Helen and Phil made us feel very welcome in their home. David and I really enjoyed our stay and would recommend their B&B. It would be nice to visit again in the future.

I can’t wait to write up and tell you all about my next adventure. Our full day in the Lake District was EPIC! 14 hours of wondrous sights and experiences! Do continue to follow me as I recount my short but wonderful trip to Cumbria.