Since holidaying in the town of Fort William our journey to and back home passed the famous Glencoe valley. The Three Sisters need no introduction. Bidean nam Bian as they are also named, create the picturesque and iconic scene which so many travellers have photographed. On our journey home we had to stop off and take a picture of this wondrous mountain range.

However before we headed towards the Glencoe valley, we paid a short visit to Glencoe Lochan, some 20 minutes drive from Fort William.

Glencoe Lochan is a man made lochan created by Lord Strathcona in the 1890’s. Lord Strathcona was governor general of Canada before returning to Scotland. He created a landscape planted with North American trees to aid his homesick Canadian wife. However Lord Strathcona’s attempts failed and the couple later emigrated to Canada. Today some people comment that the lochan looks like a miniature Lake Louise in British Columbia.  I had planned on a wild swim here, but on the day the water looked brown and uninviting and there was no easy entrance into the lochan. Sadly I gave this swim up and made my way towards Glencoe and Glen Etive.

Glen Etive is some 30 minutes drive along the A82 from Glencoe. The Glen is accessible via a winding single track road with passing places. As we drove deeper into the Glen, a white rapid River Etive surged to our left. In the distance low lying clouds drifted enticingly over the loch. There is a car park to the north end of Loch Etive with some access to the loch-side. On arrival I noticed a distinct salty scent to the air, thus being because Loch Etive is a sea-loch.

We made our way to the shoreline and stood on a sandy beach overlooking Loch Etive. Though the entrance looked inviting, I wanted somewhere more secluded. So we headed south towards a small ruined jetty, where once ferries docked. Having found a decent entrance point I began my rigmarole of getting ready for a swim. I don’t know whether it is because I chose poplar viewpoints to access the water but whenever I go for a swim, I always seem to draw a crowd. Loch Etive was no different. While I was fighting the rain and midges whilst trying to strap various accouterments to my person I noticed a man with a dog watching from the jetty, then a young couple joined him. Then to my horror a man with a fishing rod was seen poking his head from the jetty wall. From experience and reading stories from others’ I know that swimmers and fishermen do not mix! I was fearful of confrontation! Thankfully, I kept my distance and the fisherman seemed to go back to his watch. 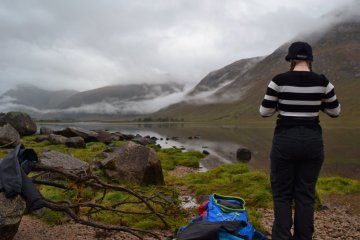 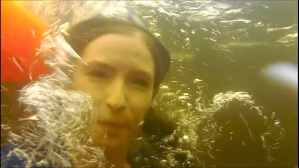 The entrance to Loch Eive was deceptive. Though the shallows looked rocky, it soon smoothed out into a bed of sand and seaweed. Much like Loch Lomond, I walked out into the water. I really enjoyed the swim in Loch Etive and was in the water for around 15 minutes. Terrence the thermometer clocked 13° but it felt much warmer.

While swimming, the man with the dog walked to the loch-side and stood chatting with David. His dog (a terrier) barked at me, and I wanted him to come swim with me, but he wasn’t that kind of dog. So I swam alone. As time passed the rain grew heavier. Worried for David, I cut short my swim and stumbled back onto land, where I hurried into my Dryrobe® and threw everything into my rucksack. I would get dry and changed in the relative warm confines of the car.

Loch Etive was my final swim in Scotland for 2018. Perhaps I can get up again next year?

Have you swam in a Scottish Loch? Visited Glencoe and the surrounding area?

Rain 🌦, wind and rainbows 🌈 were part of our two night break to the Lake District. Thanks Phil &Helen for a lovely few days away 😊 @hermistonguest @david_evans95 #thelakedistrict #thelakedistrictnationalpark #cumbia #bleatarn #hermiston