I have been so excited to share my latest adventure with you all! On Sunday, David and I spent a leisurely couple of hours walking the Secret Valley of Rannerdale.

With an early start to the day, and a two and a half hour drive north, we met 2000 cyclists along the A66 embarking on the Fred Whitton Challenge. On our arrival at Crummock Water, we parked the car at South Beach. I watched as people donned wet-suits and took to the water with orange tow-floats. I itched to follow them in! The weather was glorious, blue skies and bright sunshine, but with a fierce, biting wind.

David and I took the road leading away from Buttermere to Rannerdale’s National Trust car park where there is free parking, but we arrived too late to enjoy this privilege. From this car park is a path leading around Rannerdale Knotts, to the valley of Rannerdale. 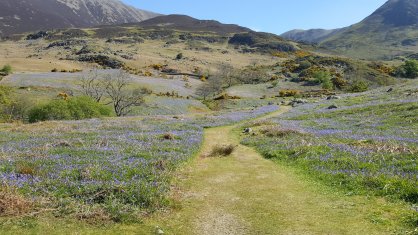 The month of May is the best time to visit due to the abundance of bluebells that have become a historic feature. Even from a distance you can see the blue haze of the fields and up close their scent is intoxicating! Local folklore suggests that the bluebells grow here due to a battle between Cumbrians and Normans after their invasion of 1066. The Normans were defeated yet the blood that was spilled spawned the many heads of bluebells.

From Rannerdale, we retraced our steps back towards the shores of Crummock Water. As the day lengthened the numbers of walkers and day trippers swelled. The shingle beach we were hoping to visit was full of families enjoying the spring sunshine. So we walked along the road until we noticed a small secluded cove.

From this cove I excitedly stripped to my tankini, donned my neoprene boots and gloves and strapped Wilson to my torso. I waded out into the agitated waters of Crummock. Terence the turtle suggested the shallows were a balmy 14ºC but with the wind that whipped across the water, it felt much colder! 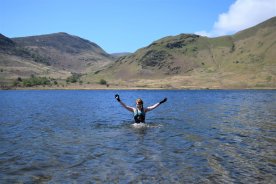 I was in the water for around 10 minutes. I really didn’t want to get out. I was having so much fun! With piercing blue skies above and green mountains all around, Crummock Water was wonderful! There were even people paddling past in canoes. Crummock looked very different to the first time we visited, you can read about that adventure here. If it had been warmer and the waters calmer I would have stayed in for longer. Swimming against the wind tired me out quicker. Shivering I came out of the water to be dried by the unrelenting wind. I got dressed quick enough and soon warmed up once back at the car with a hot flask of coffee.

Crummock Water became my first swim of 2017 and what a welcome introduction it was too! I am so happy to be back in the water again!

Until my next swim!