The Sunday of this years Spring Bank Holiday, saw temperatures rise to the mid 20°’s. However the westerlies were gale-like and even though they were refreshing from the heat of the sun, they did knock us about a bit as we climbed though Burtness Wood and on towards Bleaberry Tarn. Bleaberry Tarn was the destination of our walk. We watched as many continued up the staircase-like steps towards Dodd and Red Pike, but David and I decided that the walk to Bleaberry Tarn was enough for us.

Our day began at 6am. A two and a half hour drive was ahead of us. Thankfully the roads were quiet and we made good timing, arriving at Buttermere around 9am. Even at that time, Buttermere was humming with walkers and day trippers alike. We found a space at the National Trust parking by the Fish Inn and paid £8 for all day parking. Then paid 30p for toilet privilege before we began our walk from the car park.

We followed the path towards Buttermere before heading right, over a bridge and left through a gate towards steep steps through Burtness Wood. The tiring two hours walk took us 497m through woodland and then over a boulder field with views from the paths overlooking a glistening Buttermere and Crummock Water.

Christine having a rest

We passed the unfortunately named outflow, Sour Milk Ghyll, the second of that name, (the first we encountered at Easdale), before we came upon a corrie surrounded by Wainwright’s, Red Pike and High Stile. There were many people enjoying a well earned rest before Bleaberry Tarn and David and I did the same. We picnicked and rested at the waterside, looking at mountains all around.

I think Bleaberry Tarn has been the smallest body of water I have swam in (to date)! Where we picnicked the water was very shallow. There was also a captive audience which I wasn’t happy about. I prefer to swim in more seclusion. We decided to walk to the western side of the tarn. From there the entrance to the water was better, less stones to scramble over and the water was deeper. From here you got swimming pretty quickly which was a godsend as the water, though 16°C felt pretty chilly.

A good two hours was spent at the tarn. I swam in clear, silky waters, floated before craggy peaks and a burning hot sun and even braved dunking my head for an underwater shot! 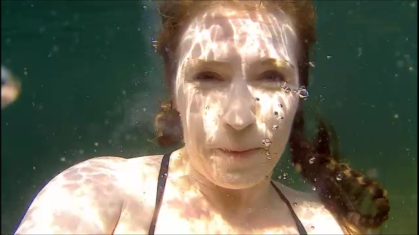 Our return walk took one hour. Hot and tired, David and I enjoyed an ice cream from Croft House Farm Cafe, before we struggled past cars that were parked on double yellow lines, on our way out of Buttemere and Lorton.

Bleaberry Tarn was a most enjoyable swim. The second of 2018. I wonder where my 3rd will be? Have you any ideas on where I should swim/walk next?

A while back I blogged about the Wainwrights David and I had inadvertently bagged while on our many swim/walks in the Lake District. You can read that post here. I thought I would follow up with a second blog which covers Wainwrights walked since 2017 up to the present. Many of the walks this time have been planned, except Beda Fell, which we discovered whilst lost en route to Angle Tarn. You can read about that exhausting adventure, here.

We took a walk to the viewpoint at Raven Crag during a short break to the Lakes in March 2017. Though the path was steep, Raven Crag was broached with no incident, and offered fantastic views of Thirmere. In spring the area is host to nesting Peregrine Falcons. We had the pleasure of seeing one fly over the tree tops.

David and I at Dodd

We walked to Dodd on a cloudy, windy day in April 2017. After visiting the Osprey viewpoint and seeing no Ospreys, we walked through forestry towards the viewpoint at Dodd overlooking Derwentwater and Keswick.

Sadly I have no pictures of Beda Fell. After losing our way towards Angle Tarn and walking a good hour or so around the desolate fells, when we did come to a trig and viewpoint across a valley, I wasn’t in the best frame of mind to snap a photo. Though in hindsight I wish I had because the view was beautiful! 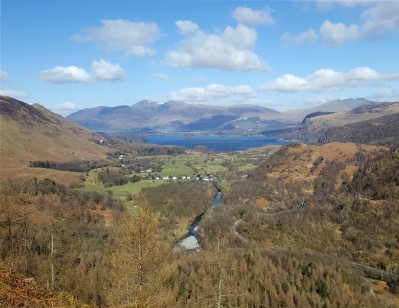 Though the smallest of the Wainwrights, David and I had difficulty in following the path towards Castle Crag. We ended up taking the direct route! We did enjoy wondrous views across Derwentwater once we got to the summit!

Our most recent visit to the newly awarded World Heritage Site, The Lake District, saw us visit Latrigg. Over the past two years we had tried to visit this popular fell but time and weather had prevented us. However we visited on a summer-like day in April 2018, where the sun shone fiercely and the views were breathtaking!

Though we are not actively seeking Wainwrights, we have accumulated eight of the 214 fells. I can’t see (especially) me walking the likes of Helvellyn or Scafell Pike but I am enjoying the views from the lower fells.

If you’ve bagged all the Wainwrights, which ones do you think I could tackle in the future?