This past week has been very uneventful! I have been scraping the barrel, trying to find things to post for this week’s Sunday Sevens, devised by Threads and bobbins.

This week our yarden has been graced with the arrival of not one but two dunnocks! At the beginning of the week we could hear a male singing for a mate and near the weekend he brought his conquest to the yarden! It has been lovely watching them flit about the plants, sifting for insects and grubs. I hope they bring their fledglings in the following months.

Below you will find two videos of them both. The video of the female shows her shaking her tail in preparation for mating, she seems a right floozy, although the male seems to just want to look for food!

Okay, I know I am cheating by posting videos but I really don’t have many photographs to share with you.

I’ve been doing a lot of cooking this week. On Monday I made a carrot and lentil soup and on Friday I made a chickpea and vegetable pilaf. Both of which I never took a photo of! Then on Saturday I remade a One Pot Mexcian Quinoa but I have already blogged about this, here. However I did take a picture of David’s dupiaza which he cooked last Sunday.

On Tuesday I fell in love.

David and I visited his brother and sister-in-law, who have a delightful son, Ewan. I was surprised when he crawled over to sit on my knee and then proceeded to poke me in the face. lol.

I can’t wait for him to start talking, there is so much I can teach him! 😀

I have recently, been enjoying the rerun of the BBC productions of The Hollow Crown. The four feature length films are adaptations of William Shakespeare’s history plays, comprising of Richard II, Henry IV parts 1 & 2 and Henry V. I missed them the first time they were aired in 2012. If you have not seen them, you can view then here, for the next five months. I would highly recommend them, even if you don’t like Shakespeare. I find that I appreciate his writing as I age. 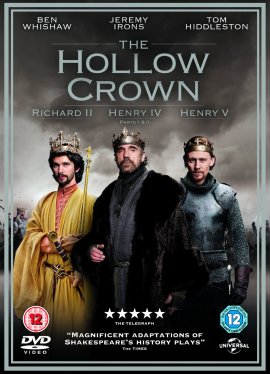 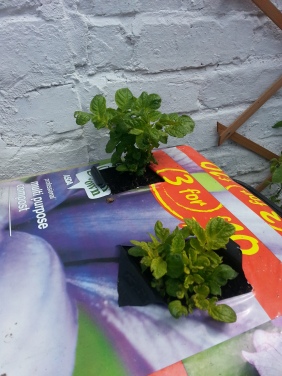 Even though the weather has returned briefly to winter this week, the sun has been out quite a lot in Liverpool. On Saturday, we took stock of the yarden. The dahlia which I thought was dead has new shoots coming from its tubers and the clematis that David’s mum gave me has at least two buds on it, and still growing! We may have had failures with the french beans and spring onions (blame Artie for that!), but the maris bard potatoes are growing from strength to strength! Fingers crossed we have a harvest!

To be honest I’ve been in a grumpy mood all day, equally mirrored by the foul weather. Why is it that when a bank holiday beckons the weather turns dire? Anyway, I tried to keep the depression at bay by making a gorgeous dinner of curried red lentils. I’ll do a further post on this in the future. 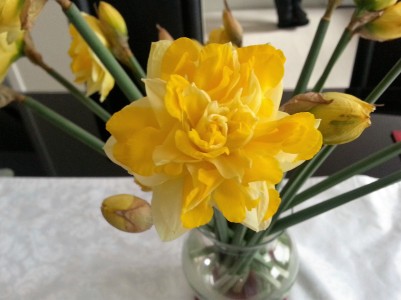 To raise my spirits I took a snap of the daffodils I bought yesterday. They are unusual as they didn’t have the usual signature trumpet but I can’t find online what type of daffodil they are.

Anyway, I hope you have a pleasant week ahead.

R.I.P beautiful Silvie. You will not be forgotten 💔 #silverbillfinch