After all the upheaval last week, with working on the house. It was nice to have the chance to get away from it all, even if it was for only a few hours.

We got up at 5am. (It seems customary now that if we go walking we head out early). I noticed that the sun hadn’t risen, already the shorter days are on their way! It took us two hours driving on the M6 to get to Grasmere in the Lake District. We planned to walk from Stock Lane car park to Easedale Tarn. The sun was out, yet there was a crisp chill in the air. There was little sign of the warmer weather the Met Office had reported, although it did warm up a little as the day progressed.

The walk to the tarn took just over an hour. Pretty good going, what with my stumpy legs and a well defined but rocky path. The gradient took us up past the beautiful though unfortunately named Sourmilk Ghyll. We stopped off at the waterfall and I pondered whether to take a dip in the plunge pool, though the force of the waterfall seemed fierce. I decided against it and we carried on towards Easedale Tarn. 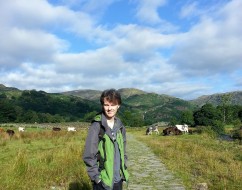 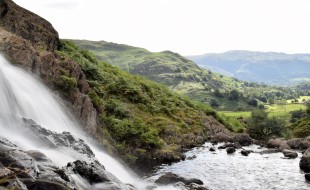 There were already a number of people at the tarn when we arrived. A group had set up tents on a headland, and looked like they had camped the night, while others were stripping off wet-suits. We walked around the tarn looking for a good entry point. We walked a further hour slipping into mud, (well I was), dodging marshy moss and fighting through Jurassic ferns. At one stage I was ready to give up but David said we should push on. His doggedness paid off and we found ourselves on the other side of the tarn on a shingle beach where a lone sheep looked bewildered by our presence. 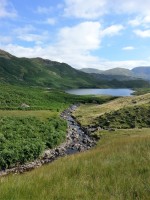 By this time a bank of thick cloud had drifted over the fells, blanketing any of the suns warmth. David sat wrapped up in his waterproof shaking his head. ‘You’re crazy!’ he remarked as I folded up my clothes. I stood in my swimsuit at the edge of the tarn. The water to the touch was cold. When I submerged my body, it was the coldest I had swam in! I knew being a tarn, Easedale would be colder than the lakes I had already dipped in, but I was not prepared for how cold. I gasped as I made my first strokes but I soon grew accustomed. 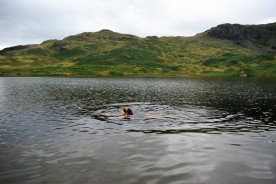 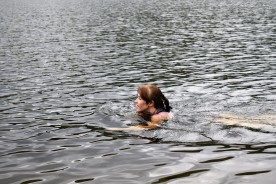 I swam back and forth along the lake-side for about 10 minutes. I felt the cold more as time progressed and what felt like fronds catching at my fingers. ‘It’s starting to rain,’ David said as concentric rings appeared on the water. However it didn’t rain, we realised then that I was not alone in the water! There were little silver fish swimming about. That was what I had felt touching my fingers!!

I got out of the water and shivered while I ate my packed lunch and drank a hot coffee. I only became warm once we headed back along the track to Grasmere and the sun decided to pop out from the clouds.

All in all, we were out walking, swimming, slipping and sliding for around five hours. The car park which has a recognition number-plate camera cost us only £5.80 for that period. I felt enlivened from my dip and the country air. We passed Rydal Water on our journey which looks a lovely lake. Perhaps before the summer’s out I can bag another swim?

Where do you think I should swim next?

… for the RSPB’s Big Garden Birdwatch 2016. The numbers spotted this year were not as diverse as in previous years.

I suppose those numbers are decent for an urban city garden/yard, but I would have loved a few more species visiting. There were four Crows and the odd Seagull flying overhead but they didn’t make the count!

Sadly no Chiffchaff or Blackbird made an appearance and the Robin and Blue Tits were nowhere to be seen! David did take some nice, colourful pictures of the Starlings and of the squabbling Goldfinches. 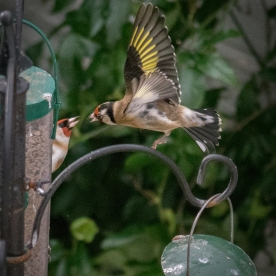 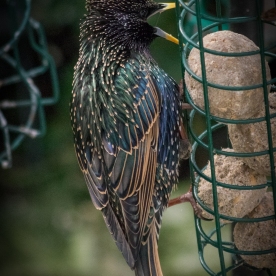 Did you take part in the count? How many species of bird did you see?