My last close up with – is of my encounter with a varied feathered few, during a half day falconry experience at Gauntlet Birds of Prey, Knutsford. 2011 seems such a long time ago, but I still remember their Lanner Falcon, Sally digging her claws into my scalp as she tried to bully me!

The half day experience comprised of firstly learning to tie the falconers knot and then handling a few birds, from owls to kestrels and falcons. 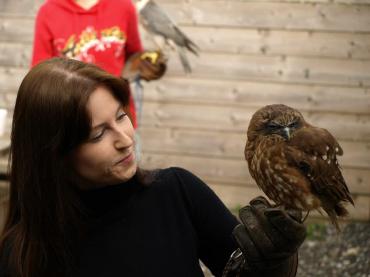 After this meet and greet there was a chance to fly a vulture and the end of the experience was a walk with harris hawks. I loved it and have always wanted to do a similar experience in future.

Have you had a bird of prey experience? What were your impressions?

Friday was a busy day for David and I.

I don’t want to waste the two weeks I have off work by just staying at home, languishing. So I suggested to David that we spend the day at Chester. Chester is close enough to home yet has places we have yet to visit. Also we had to be back by 7.30 pm for a concert by the Royal Liverpool Philharmonic!!

So Chester it was, and we decided to visit Chester Cathedral’s Falconry and Nature Gardens. We arrived at 11 am. The entrance fee was £3 per adult, with the ticket we could enter the site as many times as we wanted throughout the day. We looked around the ‘nature gardens’ and I was not impressed. There was only a small green area designated for picnics which had bee hotels and insect homes around the perimeter and another square where the birds of prey were housed, tethered by jess’s.

At 12 noon David and I ventured back to Chester Falconry and Nature Garden and had our lunch there, waiting for the 12.30 pm display.

The 12.30 pm display featured an American Black Vulture and a Harris Hawk. I had wanted to see one of the falcons flying but we could not make the 2.30 pm show.

The flight display with Head of Falconry Tommy McNally, was very authoritative and educational. He explained why American Black Vulture’s had no feathers on their heads and how their white legs were a by-product of their own urine, which coats their legs with a sort of antibacterial to keep them clean and free from disease whilst feeding on carrion.

During the performance, we stood in the display field and Tommy asked for a volunteer. A tall, lithe girl volunteered and had to run the length of the field with a chicken head, thus causing the Vulture to run, then fly after her! Tommy said that vultures were lazy birds and this was one way to show them flying!

He then asked for another volunteer and I volunteered David, as I can’t run!! He had a glove put on his left hand and a chicken head placed amongst his fingers. Tommy asked David to run as fast as he could so that the vulture would have to forsake bounding on the ground and flap his wings! David set off with the vulture following his heels. The vulture took flight and soon got the chicken head! David was asked to run back and the vulture was rewarded again with a chicken head!

Frankie the Harris Hawk was next up, and he flew deftly between the heads of the small crowd and also wolfed down a chicken head, much like an owl would!

I find birds of prey highly thrilling and enjoyed my time at Chester Cathedral’s Falconry and Nature Garden’s. It would be a great place to visit during the summer, when in-between shows you can go shopping, have something to eat or visit the river Dee or castle! There is more to see in Chester than meets the eye! A visit to the Roman amphitheatre and the city walls is something that should be on every tourist’s to see list when visiting the area!