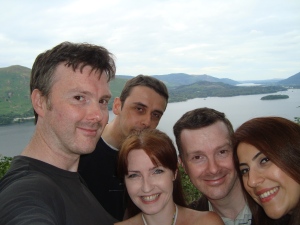 Five Go on a Grand Tour to Cumbria

It’s quite amazing how much you can pack into 15/16 hours in just one day!

Saturday was the start of my week long vacation. David for the past week, had been making plans with his brother, Gary and cousin Keith to go for a day out to the Lake District, Cumbria. With Bilgen, Gary’s wife and myself in tow.

Keith was the designated driver and picked us up from no 49 at 8. 15 am on a bright sunny morning in Liverpool. We drove along the M62 and M6 to Windermere (the largest lake in England), stopping at Lancaster services along the way. The journey took just under two hours and by 10 am we were at the lakeside of Winderemere. 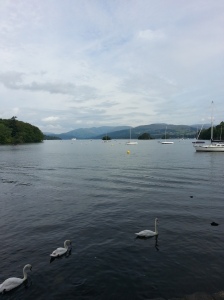 Windermere is not my favourite lake, Buttermere holds that accolade but we spent a good hour walking the lakeside, watching the boats sail by and people struggle with oars as they tried to turn rowing boats to the shore. David said he would like to try a rowing boat, he got scoffs of disbelief in return from Keith and myself. Bilgen and Gary wanted to take a cruise along the river, but the duration was 45 minutes and our car park stay was only for 2 hours. So we jumped back into the car and headed towards Keswick.

Keith’s Sat Nav in the new DS5 was appalling! It took us down small dead end roads and streets where barely a Smart car could pass! And don’t ask about the ‘comfy’ seating in the back. It’s safe to say my back and bottom will take days to recover! lol

After a hours drive we finally got to Keswick and the Surprise View. Where we picnicked before the view of Derwentwater and Bassenthwaite Lake. The view was lovely. I could have stayed there all day!

After lunch we decided to head towards my favourite lake, Buttermere. However we didn’t take the left turn though we had Keith’s Sat Nav and my Google directions leading the way! We ended up on a road towards Loweswater which had no parking places! I was not best pleased!

We then drove endlessly on towards Ennerdale Water which again did nothing for me! During the walk to the lakeside I had a Tortoiseshell Butterfly land on my butterfly printed dress. While waiting for the other ‘four’ to come back from the shingle beach I met with three hikers who were disorientated and wondered on which path to follow. One asked me ‘where have you come from?’ If I had been witty I would have said.

‘By magic!’ However I am not quick witted and simply said, ‘up that path towards the car parks!’ Duh!

After a bit of a lull with sightseeing, we headed towards Wastwater (the deepest of the lakes). The clouds came rolling in and the rain followed after, though Wastwater looked very atmospheric!

It took almost two hours driving from Egremont to Kendal, where we stopped off at an Indian restaurant, called simply India for sustenance. I found it on Google after searching for restaurants in the area.

The restaurant was relatively quiet when we arrived, but after 8 pm it filled up with locals and a Stag Do, the groom was dressed up as a cow! It got quite noisy. The actually restaurant was small. Only had room for say 30 people? The ambiance was made by the people eating as the décor was a bit lacklustre. I did like the authentic Indian music though, it made me want to jump out of my chair and dance! The service was friendly and welcoming. The waiter who served us knew Liverpool and made us feel very welcome. He described the menu expertly and I could have listened to him all day talking about curries. They did not however have a dupiaza on the menu so I had to order a vegetable masala though in hindsight I should have tried the bhuna, the taster sauce we were given was gorgeous!

We all left the restaurant after 9 pm full and satisfied! The journey home only took 1.5 hours. We were home by 11 pm!

Though the day seemed long, we did indeed see lots of sights, some where new while others we had visited before. A journey is always better undertaken with friends!