For the past three years, David and I have headed out for a walk on New Years Day and 2019 wasn’t any different. This year we managed to take smiley Riley along with us. We got up at the ungodly hour of 5.30am (it was still dark) and headed up the M6 towards the Lake District. We took the usual pit stop at an eerily quiet Lancaster Services before driving the remaining 1.5 hours, arriving in Keswick just before 9am.

After booting up, with Riley on lead, we headed towards Portinscale and the western shores of Derwentwater. We spent a good two hours walking to and along the shore of Derwentwater. We passed alpacas in a field of the Lingholm Estate, discovered Hawes End jetty was being rebuilt and picnicked before a resplendent Blencathra and Skiddaw in the strong winter sunshine. Whilst David took pictures, Riley and I paddled in the shallows of Derwentwater and ran chasing sticks along the shoreline. I was surprised at how quiet the lakeside was. It was only after 11am that the crowds started to arrive, by then we were heading back towards Keswick. It was a perfect day and a wonderful start to the new year!

Below find a collage of pictures from our time at Derwentwater.

Riley and David at Derwentwater

We walked back to Keswick and joined the throng among the bustling streets. There were just as many dogs as there were humans in Keswick and I relished the chance to share this dog friendly town with Riley. Indeed Riley seemed to enjoy himself and attracted quite a few adoring fans. While we stood outside the Old Keswickian chip shop waiting for David to come out with a portion of chips for Riley’s humans, people approached Riley asking to stroke him. It was like he was a celebrity! 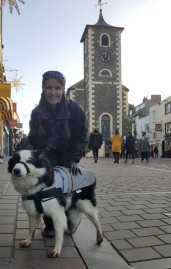 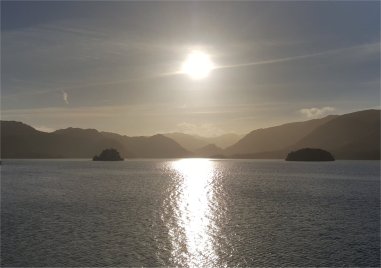 The Jaws of Borrowdale

David and I settled on a bench alongside the eastern shore of Derwentwater to eat our chips while Riley chilled at our feet. I think the 10 miles walking had tired him! To end the day, even though the afternoon sun was fierce, we took Riley to a very busy Friars Crag overlooking the Jaws of Borrowdale.

We retraced our steps back to the car and tiredly headed back home. Riley slept the three hours home while David and I made another short stop at Lancaster Services for a restorative Costa coffee. All in all it was a positive beginning to the new year and one I shall remember for a long time to come. Riley at the shores of Derwentwater was a dream come true, but where in the Lake District do you think we should walk him next?