This week I have spent most of my time in the yarden! The NW of England has had some lovely long spells of warm, spring weather. Warm enough for me to bring out my bandeau dresses and coat my skin in SPF. Artie has also enjoyed stretching his legs and worrying resting bumblebees who when flying off, seemed to urinate!!

The yarden is looking verdant. Spring bulbs are flowering and trees/shrubs are heavy with dense foliage. The air has been laced with singing dunnocks/blackbirds and the happy buzz of bees and other pollinators.

I recently read that rhododendron pollen can be toxic to bees. I hope the nectar from my plant is not detrimental to this busy tree bumblebee!

Keeping with the theme of nature. I have signed up to take part in The Wildlife Trusts’s 30 Day’s Wild 2016. Last year, lovely Sharon from Sunsine and Celandines got me interested in the scheme and I had a wonderful June observing nature more closely. Why not sign up and join in the fun?

You can read my 2015, 30 Days wild at the following: week one, week two, week three, week four. Happy reading!

This Friday, 22nd April was Earth Day. Their campaign, to ‘motivate people into action,’ in regard to the welfare of our planet. I particularly liked the ‘doodles’ on Google’s search page. This one was my favourite!

Earlier in the week we had a blue tit visiting. He spied the cat hair we had left out for birds nests and I caught video footage, (though not great) of him trying to take the whole bundle! I saw him fly off with most of it in his beak. So somewhere, Artie’s hair lines the nest of a blue tit!

This week I have begun to read Dan Brown’s Inferno. I tried to read it a couple of years ago and failed. I thought with the film coming out later in the year I would attempt it again. Talking of books. I have applied for a library card. I haven’t registered with a library for years, but thought it would be a good idea to do so. I can pick and chose what books I read now without the cost.

This weekend, England celebrated the 400 year anniversary of William Shakespeare’s death. The Shakespeare’s Globe Theatre in London commissioned The Complete Walk, a screening of ten minute productions of each of his 37 plays. Liverpool was the only city in the UK to also screen these films and I was excited by the opportunity to see some of my favourite plays. I dragged David along with me to some iconic venues in the city, such as St George’s Hall, Liverpool Cathedral and the Tate. We also visited some more unusual venues, I particularly liked the grand feel to the hotel Aloft, which I later read is a renovation of the Royal Insurance Building and Ziferblat, which is a pay per minute cafe.

Of the productions we saw, my favourites are as follows: The Tempest, I found Douglas Hodge walking out into the sea at the end very touching! James Norton was fantastic as Richard II, I just wish it wasn’t viewed on a small TV screen in a railway tourist centre, and Much Ado About Nothing with Samuel West and Catherine Parkinson precisely captured the prickly romance between Benedick and Beatrice. The only downside (or upside) to seeing these ten minute films is that they make you crave to see the whole performance!

Have you been to any Shakespeare Celebrations this weekend? Do you indeed like the Bard?

Have a nice week ahead.

The fair weather on Good Friday, here in the UK, lulled us into a false sense of hope that it would last the duration of the long weekend. I have recently heard the term yarden and thought it was apt to my green space. It is a yard but not quite a garden. David and I made use of the sunny weather and planted out the french beans. 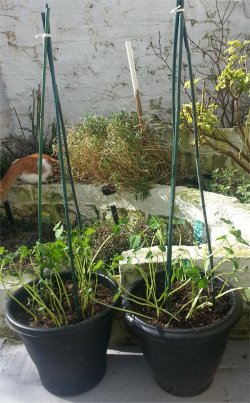 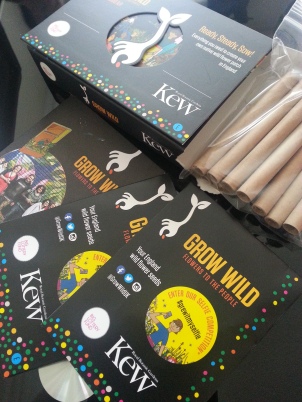 I also scattered a packet of the free wildflower seeds I received from Grow Wild. They are a national outreach initiative from Kew Gardens which aims to transform local spaces into wildflower havens. Visit their website if you would like to request your free pack.

On the radio, I have been enjoying 12 hours of music each day this weekend, as Classic FM count down the top 300 pieces in their Hall of Fame. It started on Friday with the piece at number 300 being the theme from John Williams’s Raiders of the Lost Ark. I wonder where the pieces I voted for will be?

While relaxing to the music I took the opportunity to sit and devour Melvin Bragg’s novel, Grace and Mary. It is about a son who is coming to terms with his mother’s dementia and also follows the story of her birth mother. It is a sad read. The narrative started slowly but it soon picked up speed and I read it in a few days. 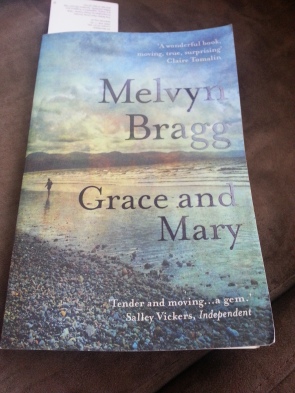 Recently I was recommended a book. The Shadow Hour by Kate Riordan. She is a new author to me. I referred to Amazon so I could put the book on my wish list, but I accidentally pushed the Buy it Now button and the message on the computer screen read: your order will be delivered to your Kindle. I hadn’t intended on buying the novel, but perhaps it will be a happy mistake as I begin to read it this weekend? Have you bought anything that you didn’t intend to?

Earlier in the week I watched David Tennant’s version of Shakespeare’s Richard II. Previously I had enjoyed his Much Ado About Nothing with Catherine Tate. I found that play hilarious! Richard II was a different beast entirely. In Act three, scene three Richard is talking to the Duke of Aumerle about the impending loss of his crown. The nihilistic attitude of Richard struck me to the quick! I pray I won’t be so defeatist in the face of my struggles!

Richard II: What must the king do now? …
…must he be deposed? … must he lose …
I’ll give my jewels for a set of beads,
My gorgeous palace for a hermitage,
My gay apparel for an almsman’s gown,
My figured goblets for a dish of wood,
My sceptre for a palmer’s walking staff,
My subjects for a pair of carved saints
And my large kingdom for a little grave,
A little little grave, an obscure grave.

The fourth year anniversary of my father’s passing will be on Monday, so David decided to cook a curry. My mum and my youngest brother joined us. It was an evening filled with food, laughter and cava, and where we talked the world to rights! It’s always nice when the family can get together. For the table’s centrepiece I bought some spring flowers. My father liked tulips so it was a fitting commemoration.

I’ll sign off now by wishing you all a very happy Easter, and if you don’t celebrate it then have a happy Sunday.

Sadly, Riley went to Rainbow 🌈 Bridge yesterday. 2 December 2022 at 13 years and 7 months. He went to sleep at home with a vet in attendance. We are now waiting for his ashes to return to us. 💔😭 #bordercollie #bordercolliesofinstagram #smileyrileythebordercollie #dogsofinstagram #goodbye #sad