My birthday month hasn’t been so kind to me this year. It’s been a month of severe stresses and worries and not much fun in between. David has had many trips to the hospital this month, after his pneumonia diagnosis during the summer. We all feared the worst but after a PET scan, we finally got some good news that it wasn’t the disease we all dreaded. However, the specialist doesn’t really know what is wrong with David’s lung and there will be another scan in three months time. Fingers crossed all will be well.

The beginning of October, saw David and I take a visit to the annual Apple Festival at Gorse Hill Nature Reserve. However, this years festival wasn’t as good as previous years and the selection of apples was limited. We did come away with some sunset and ellison orange but even the apples weren’t at their best this year.

Our aviary lost yet another resident, the lady gouldian finch, Nero. Nero suffered from neurological issues and had become paralysed down one side. He did manage heroically but in the end he passed away. Fly free little one.

During an early morning start at work, I witnessed a wonderful autumn sunrise with mist enshrouded fields. It was a beautiful beginning to a day.

We had another success with our pigeon rehabilitation. Mocha came to us with a runny tummy and breathing issues. We treated for coccidiosis, a parasite that affects the digestive system. We saw an improvement after two days of giving the medication and then Mocha stayed with us for a further five days when we treated for canker, and kept her warm. Her respiratory difficulties eased and we released her back to the wild, but not before giving her a white leg ring, so we can keep track of who we have helped. Soon our yarden visitors will all have leg bracelets on. 🙂

In October, we finished watching all 10 series of Stargate, which we thoroughly enjoyed! We also watched the controversial Squid Game, which was both horrific and sad in equal measure and we have just finished the second series of the supernatural Locke and Key. Do you have any recommendations on what to watch next?

It’s that time of year again when sparrowhawk visits increase. One Saturday we were visited by a male sparrowhawk who stayed around the area for over half an hour. He managed to get a meal a few days later.

At the end of October we made a quick visit to Liverpool’s City Centre to see the River of Light Festival. We visited the light festival in March, but I though this October’s selection of lights were better than in March!

David’s family had a get together for Halloween. Some of us dressed up. I went as a Jaffa from Stargate. I wanted to go as Teal’c but the bald wig I bought didn’t cover my hair so I had to go as a makeshift Jaffa instead. Did you do anything fun for Halloween?

For the past couple of years I’ve celebrated my birthday with a cold water swim! This year, since The Lake District was underwater with streams that were once paths, I decided to choose Snowdonia as the place to celebrate. Llynnau Mymbyr was the llyn I chose and it was such a wonderful birthday swim with the Snowdon massif looking glorious in rich autumn sunshine. I dried off with my new towel, the ordinance survey map of Snowdonia.

That was my October, how was yours? Do you like this time of year with the crisp mornings and golden trees or like me, just want to hibernate?

Since it’s back to normality after blogging everyday in June for The Wildlife Trusts’ 30 Days Wild, I thought I would write a Sunday Sevens.

Last weekend my friend from America visited us again. She is a big fan of Riley so David and I decided to take them both on a morning walk to Formby Beach. 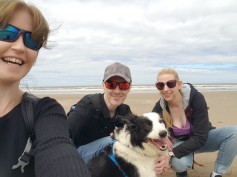 Selfie on the beach 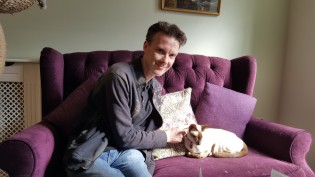 Then in the afternoon we visited Liverpool’s Cat Cafe. 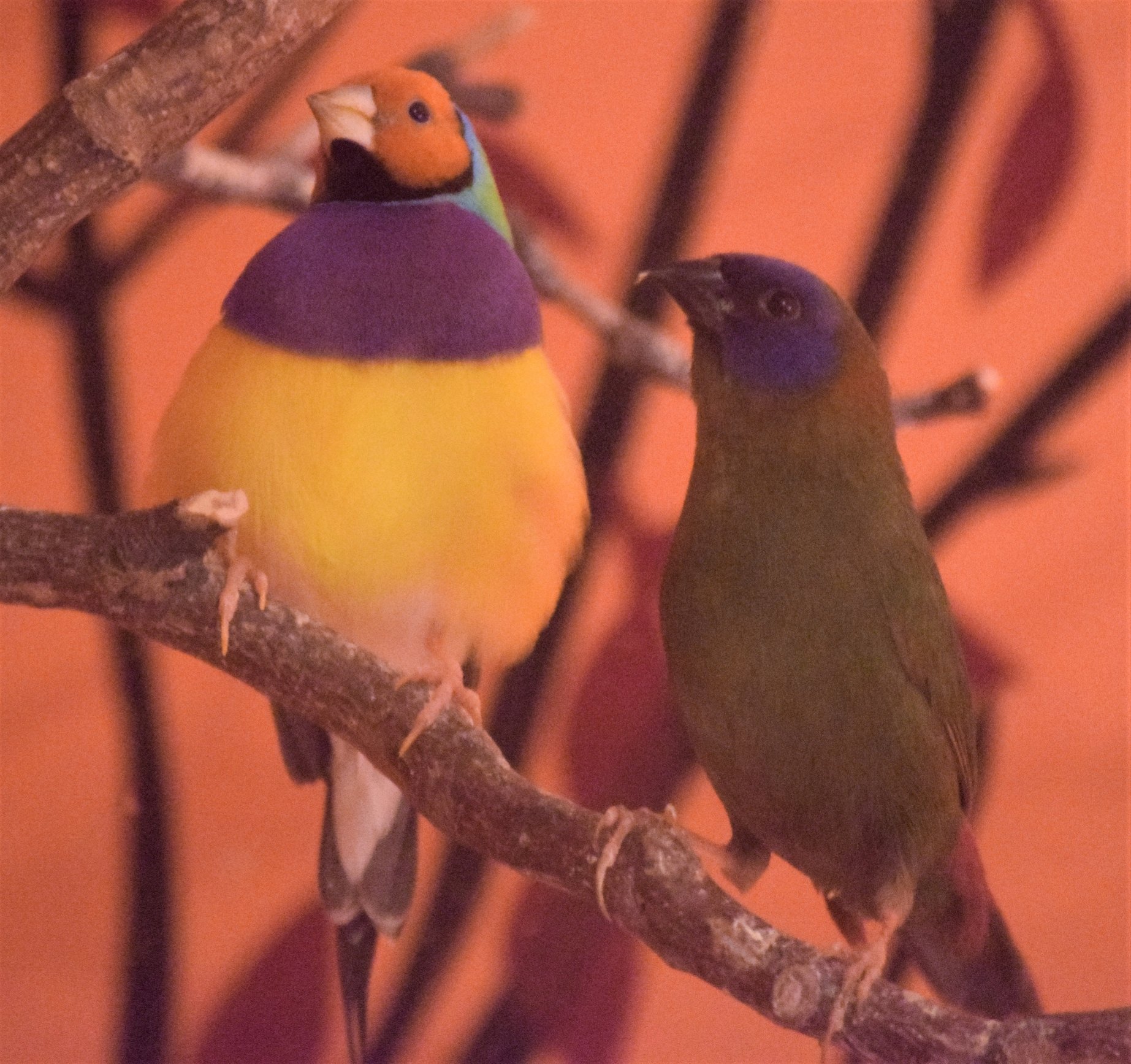 In a previous Sunday Sevens from 2017 (found here), you may recall that I wrote about having to separate an aggressive blue-faced parrot finch from the aviary as he attacked another finch.

In April this year, we decided that two years in the prison cage was enough time for the two blue-faced parrot finches, and so we paroled them to be reintegrated into the aviary.

However, this Tuesday David and I came home from work to murder in the aviary! The victim, poor Lady Gouldian, Set.

We found him with all his feathers plucked from his head and close to death. We put him in the hospital cage in the hope that he would pull through but he succumbed from his ordeal not long after. There was no need for an Agatha Christie detective, we already knew who the culprit was: blue-face parrot finch, Leaf who was seen the previous day chasing Set! It looked like he was back to his aggressive ways! Saddened and angry in equal measure we separated both blue-faced parrots from the aviary and now they reside in the prison cage for life! We buried Set under the Californian lilac, he was only two years old.

Book I am reading:

For the past few weeks I have been reading Kate Morton’s The Clockmaker’s Daughter. I am enjoying the narrative and the colourful cast of characters. Have you read this book? If so what did you think? 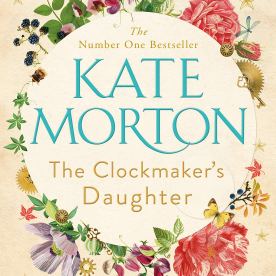 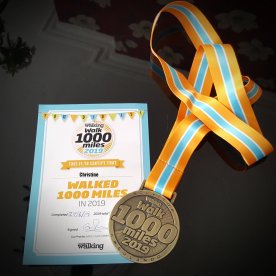 I hit my #walk1000miles target on 25th June 2019. Since then I have been continuing to clock up my miles in the hope of getting to 2000 miles come the end of the year! My weekly total has been 39, bringing my annual total to 1,073 miles. If you are participating in the challenge, how are you doing?

For the first time since I can recall we have not one, but two herring gull nests around our house. They have made nests on nearby chimney stacks. One nest had three chicks, whereas the other only two. On Friday we noticed that the nest with three chicks only had two. On further inspection David found a grim discovery. One of the chicks had fallen (or been thrown) from the nest. He was stranded on a roof and come Saturday morning his body was no longer there. Sad times.

This weekend, David made some more cupcakes. He made peanut butter ones and some Victoria sponges for me. Yummy! 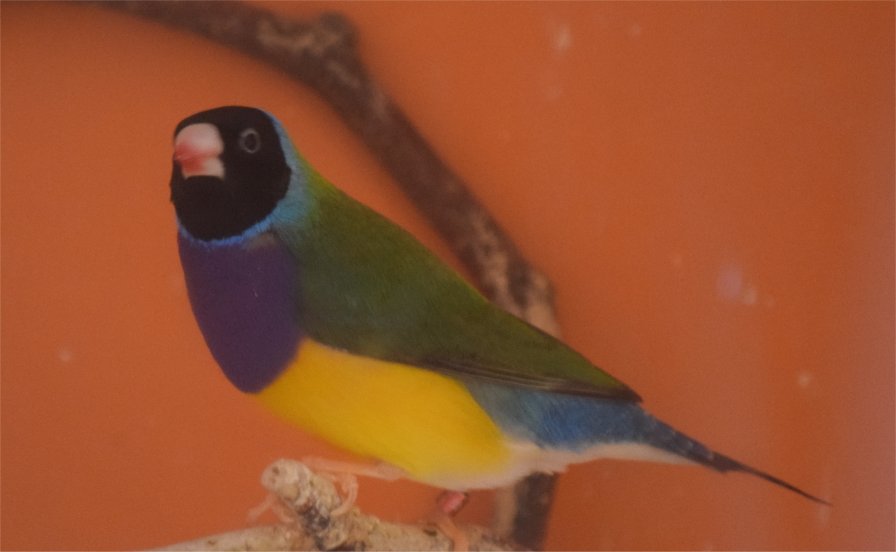 On a happier note to end with, on Saturday David and I visited a pet shop in Warrington. We were looking for a mate for Star our star finch but they only sold pairs. So we opted for a male black head/purple chest Lady Gouldian. I named him Nero. He is a beauty! He has been trying to catch the eye of our resident female. I hope he is successful.

Sunday Sevens is devised by Natalie at Threads and Bobbins.