While some people were picketing and marching to Downing Street. I was enjoying one of the best days I have had in such a long time! 😀

David went to work as usual, meaning I had the whole day to myself! I did the obligatory laundry before 10 am and then entertained my mum for two hours with coffee and shortbread biscuits as she shortened two dresses for me! One I hope to wear at the weekend! 😀

The sun came out mid morning. According to the BBC weather forecast the North West of England was a sun sandwich! I’d rather be in the centre than be in the cloud and rain! The sun boosted my spirits even more!

After lunch, I with secateurs in hand took to attacking the Cat Mint that had overrun the garden! I chopped and hacked at the Apple Mint and tidied up the Coriander and Wallflower. The poor bees were confused as they came flying into the yard to find no Cat Mint flowers! They had to settle for the blooming Salvia! 🙂 While pruning I managed to capture a strange looking spider. A Comb Footed Spider from the same family as the Widows!

After 2 pm, warm with the sun glowing overhead I poured myself a small measure of wine and settled down to listen to my favourite actor, Jonathan Firth in a radio play, Farran at Bay set in Jerusalem before the British lost their control of the region. I really enjoyed the production, though it was about a rather sombre event and Jonathan had the most air time, which is always nice to hear! 🙂

Afterwards I continued with the wine while listening to Classic FM, and in bikini sunned myself in the yard before David came home. 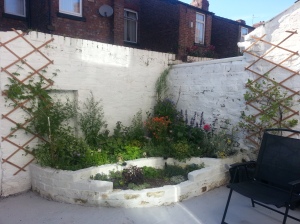 It’s back to work tomorrow, but it’s only for one day! I raise a glass to the coming weekend and hope it’s an enjoyable one! 😀