This weeks Sunday Sevens, (devised by Natalie at Threads and bobbins), comes mostly from our home, as David and I have embarked on a major ‘project’. The fortification of the beams that hold up the floors in the dining room, hall and living room. Phase one: so far, as I write this post, very tired and dusty, we have managed to work four days just on the dining room. David is ever the optimist, but I am a bit more realistic. Things never go according to plan, not in a 100+ year old house.

Day one was all about taking the boards up and assessing what work needed doing. Day two was spent in DIY shops, too much time for my liking if you ask me! Work proceeded in fits and starts on day three! Day four we managed, (or more truthfully David) to finish work on the two sagging beams and replaced the floor boards.

Phase two: we have now moved our attention to the floor between the kitchen and the dining room. On taking up the boards David found that the job was bigger than we had hoped! It never seems to end!

You wouldn’t have guessed it but I began the week feeling much more chirpier. I baked an apple pie from the harvest of bramley apples we were given. I still have lots of apples left so when work on the house is done (ha ha), I will make an attempt at making miniature pies.

In between work, David and I have been catching some fresh air in the yarden. While I enjoyed the flowers, David played at being the bird whisperer. Firstly we found a pigeon, (Blake I named him), sitting scared in a corner of the yarden. David picked him up, and we saw what looked like puncture wounds on his wing. We tried to nurse him but he passed away a few days later. 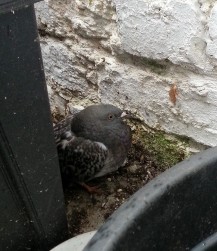 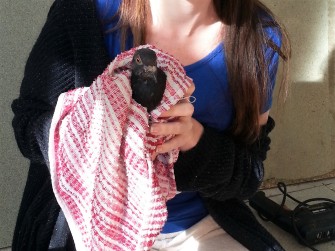 All week, David has been trying to catch one pigeon that has been seen with string around its foot. On Friday David managed to catch, Hoppy as she’s affectionately named. He gained her trust by hand feeding her and then captured her in a box! (Probably lost her trust then!) She is now resident in our guest room. How long she will stay is anyone’s guess. The thread that is wrapped around her foot has been covered with skin so David has been teasing the fibers daily in the hope of loosening some. Only time will tell.

I on the other hand caught sight of a large white butterfly resting on my buddleia, and my Grow Wild seeds have grown to become plants that have started flowering.

I’ll end on that colourful note.

I wish you all a wonderful week ahead.