‘…is never wasted,’ so quoted Sigmund Freud. Being an ailurophile (I had to look the word up), or a lover of cats, I wholly agree!

For an early birthday celebration, I decided to treat my mum and David to coffee and cake at the recently opened Cat Cafe in Bold Street, Liverpool. I pre-booked our hourly session at the cafe, at £12 per person. This includes unlimited drinks while cakes and pastries were an additional cost.

Our time slot was 10 o’ clock, and even at this time the cafe seemed busy with parties coming and going. To keep the resident cats safe, there are three doors which patrons have to go through. After being booked in, a pass to note down any additional spends given and the dos and the don’ts listed, we were admitted.

The Liverpool branch is on three floors. We perused the decor and the many hiding places for the cats before pondering where to sit. On the first floor there were lots of comfy looking sofas but David chose the ground floor part of the cafe as this was where most of the cat action was happening!

We took our seats close to the kitchen. The choice of table seemed lucrative as I had not long sat down when Rose, a long-haired tortoiseshell came over and made a bee-line for my lap. She happily sat and suckled me for 10 minutes. 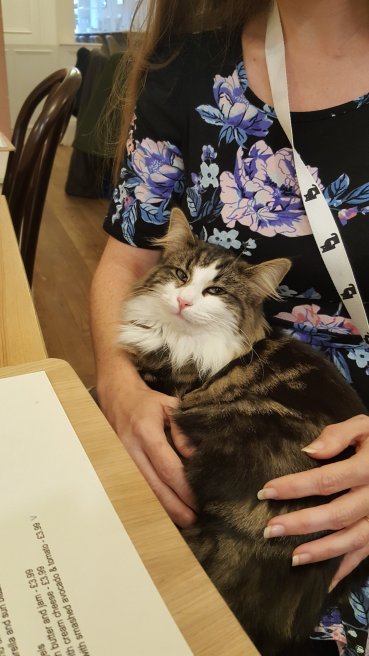 We ordered hot drinks and a selection of cakes. Mum had a toasted teacake, I a scone with cream and jam and David chose the cake of the day, which was a large slice of chocolate-orange cake. 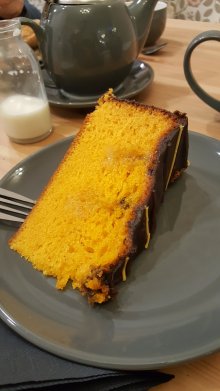 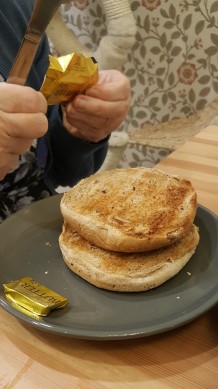 Many of the cats as you can imagine were curled up asleep. All was quiet until the food was served and from a towering cat bed two cats emerged. Dobby the Sphynx and Sebastian the Siamese! The hairless Dobby sported a black jumper with orange bobbles to keep him warm while Sebastian cheekily tried his luck pawing at our selection of cakes. It was funny interacting with the cats who all seemed friendly. 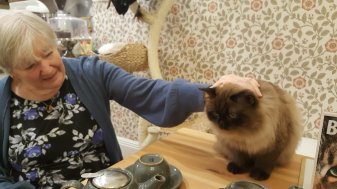 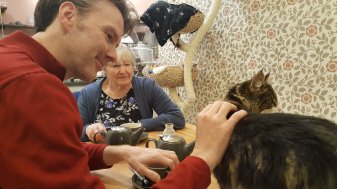 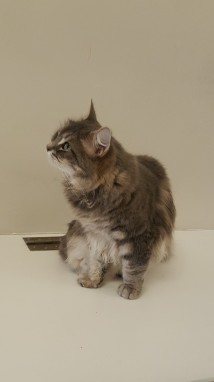 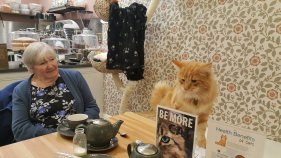 We took many photographs and spent a full hour with the cats of Liverpool’s Cat Cafe. I am happy to report we all enjoyed ourselves and would definitely visit again, even if we were scratched and bitten for milk and food! :p

Have you visited a cat cafe? If so what were your impressions?

I wasn’t going to do a ‘flavour’ of 2017 post. I have struggled with finding new recipes to try this year. However after looking at pictures on my phone I have come to the conclusion that I have taken enough pictures to warrant a post. So here’s a ‘taste’ of my 2017!

I hope you enjoy! 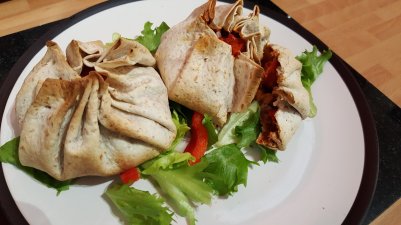 Roasted vegetable parcels have become a staple to our yearly menu. They are full of roasted red onions, peppers and cherry tomatoes. Wrapped up in a toasted tortilla with tomato puree and mozzarella. Served on a bed of salad leaves, they are delicious! 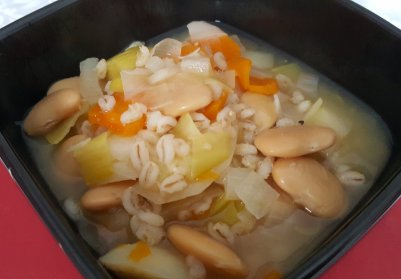 28th February 2017 was World Scouse Day. The celebration of all things Scouse was in it’s fifth year! I celebrated by making a blind scouse.

While David made a Victoria sponge, I was enjoying red velvet cakes and cucumber sandwiches. Part of an afternoon tea at Jam Liverpool.

Another recipe I go back to time and time again is Chungah’s, one pot stuffed pepper casserole. I use bulgur wheat instead of ground beef and add a little bit more water. The result is a delicious, wholesome meal.

After a meltdown in the kitchen, David took up the knives and oven gloves and managed to whip up a vegetable masala, with microwaved spicy Bombay potatoes. 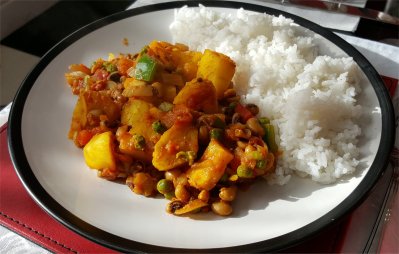 A first for David and I in 2017, was attempting to make elder-flower champagne. It may have only stayed fizzy for 30 Days Wild, but it will be something we will attempt to make again next year. It made for a refreshing early summer’s drink. The whole family enjoyed it!

A chippie tea from The Old Keswickian was enjoyable, especially at the lakeside of Derwentwater during our summer visit to Keswick. 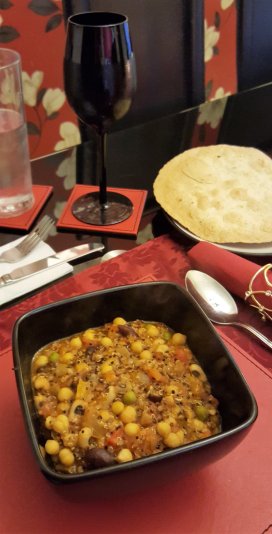 A three bean quinoa chilli  (picture above), recipe from oh my veggies, is so filling and makes so may servings. I literally have three bean quinoa chilli for my work lunches, five days a week!! It’s as spicy as you want. I usually put in half a teaspoon of chilli powder! It’s so full of beans and vegetables, it’s become a staple in my repertoire.

During a week off work I treated mum to a rich cream tea at Leaf, Liverpool. It was jummy!

Another staple dinner I go to when I have no idea what to cook is a Brown Lentil Chilli, from Katya on A Little Broken. I serve the meal for two with toasted tortillas.

Another recipe I return to is The Vegan Household’s/Gourmet Vegan, spicy butter bean and (vegan) sausage casserole. I use different sausage brands from Asda’s own to Linda McCartney, so not always vegan. However the result is always delicious and very filling! 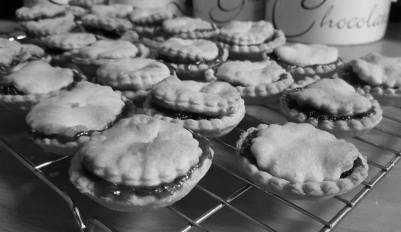 Unfortunately the only pictures of the little mince pies I made this year were taken as part of the #7dayblackandwhitephotochallenge on Instagram. I used pre-made short crust pastry, but I think I’ll make my own next year.

Let me know if you have tried any of the recipes featured? Or my post has inspired you to try some of them!

Recently I met up with the lady I work with, Sue and her new guide dog, Kallie for lunch in Liverpool. With both of us not being ‘girls about town’ we were scratching our heads as to where to go for lunch. I know there are a myriad of places to visit but I was after somewhere were you weren’t turfed out after about an hour. Then I recalled an independent tea shop and restaurant in Bold Street, Leaf. I remembered visiting with a student of mine, now friend, years ago. I searched my blog and found that the visit was three years ago! How time flies!! 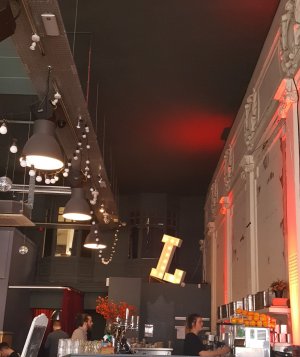 We visited Leaf at probably the most busiest time of day, 12 noon. The restaurant covers two floors with stages for live bands. The furniture is made up of an eclectic mix of wooden tables, picnic tables, leather sofas, arm chairs and plastic canteen chairs. Drapes cover the walls in a building that was once a tea shop, cinema, then clothes shop.

We were advised by one of the friendly staff that there were more tables upstairs which was less busy at that time. So we hit the button on the lift and made our way to the 1st floor.

At no point was the presence of Kallie an issue. A firm reminder to less welcoming establishments of Guide Dogs for the blind’s Access all Areas campaign.

We chose a table in the corner, where there was lots of natural light coming from the tall art deco styled windows. The first floor felt light and airy. There was a relaxed feel to the place, which I also got the first time I visited. Service was top notch. There were complaints in that area (nor any other for that matter). Our order for drinks and food was taken at the table, though you can opt to order at the bar.

There is a varied choice of lose leaf tea available. Sue chose the English Breakfast Tea and I the Ceylon. We both ordered for lunch the Pepper and Tomato Soup, which we did not have to wait too long for.

The soup was delicious, warming and of good proportion, it was served with a slice of focaccia bread. It also stayed warm for over half an hour as we took our time chatting and catching up. The Ceylon tea was aromatic and better served with no milk, much like the Darjeeling at Jam.

After about an hour we decided to prolong our stay and ordered a Leaf Cream Tea which consisted of another pot of tea (of your choice) and a scone, with clotted cream and jam. At £5.95 I thought was good value. The pots of tea filled three small cups. In total we had six small cups each! It was a very wet, caffeine filled afternoon!

I liked the presentation of the cream tea and the scone was ‘huge’! I went home feeling very full!

In all we spent three and a half hours at leaf and not once did we feel the need to vacate our table. The service was friendly and approachable and the meals were value for money.

I would definitely visit Leaf for lunch again in the future.

Have you had a meal at Leaf? They have restaurants in Liverpool and Manchester. What was your experience like?