I had been excited about attending this concert for some time. The Royal Liverpool Philharmonic Orchestra and chief conductor Vasily Petrenko had earlier in the week been wowing the audience at the Royal Albert Hall, London in the biannual Classic FM Live. Friday’s programme borrowed heavily from their earlier London performance, though sadly Petrenko did not return to Liverpool with his glittering sequinned jacket which he wore in celebration of Classic FM’s Make Some Noise charity. 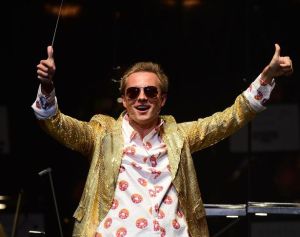 David and I were in the cheap seats in the upper circle. The auditorium filled up nicely, but was not a full house as Thursday’s performance of the same programme was. I was thankful for this and we enjoyed a unobstructed view of the orchestra! 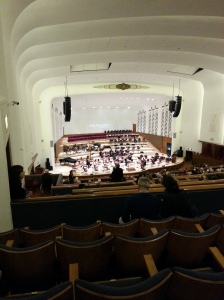 View from our seats

After the National Anthem, the orchestra started the evening as they meant to go on with a Celebration Overture composed by Nigel Hess and commissioned for the Philharmonic’s 175th anniversary! It was a fun opening to the concert though I was more interested in what came next.

Ji Liu who had also graced the stage of the Royal Albert Hall with Petrenko and co on Tuesday, came to Liverpool to perform Rachmaninov’s ultimately romantic second Piano Concerto! 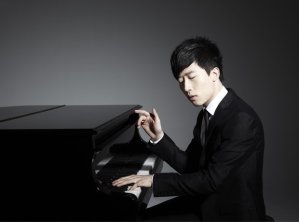 It is undoubtedly my favourite piano concerto! I love the lyricism of the piece and the second movement (adagio sostenuto) is spine tingly good. Ji Liu cuts a very slender frame on the stage and at times during the performance the piano seemed too small for him, (if that make’s any sense)! He played the piece deftly and with skill.

During the opening movement (moderato), I found that the orchestra seemed to drown out the piano at times. I have noted this earlier in my review of Nobuyuki Tsujii‘s performance of Rachmaninov’s third piano concerto. Perhaps this was why the orchestra was surrounded by padding that adorned the walls? In part to rectify the change in acoustics due to the earlier renovations? Either way, the performance was exceptional.

While Ji Liu took the audience into the slow, second movement, made famous by David Lean’s Brief Encounter, I prepared myself to be swept away with romantic feeling. However the reality was that any sentimental musings were disrupted by some unfortunate, who coughed and retched about five minutes into this musical reverie. I imagined the poor stricken soul expiring in his chair. I gripped David’s arm hoping the gentleman would recover or graciously leave the auditorium. He thankfully recovered so we could all enjoy the remaining performance which culminated in Ji Liu coming onto the stage three times to raucous approval and then satisfying the appreciative crowd with his rendition of Skyfall.

After the interval, the Philharmonic continued their celebratory mood, with Glinka’s Overture to Ruslan and Ludmila, Vaughan William’s English Folk Song Suite and Verdi’s Aida march and ballet music. The concert was rounded off loudly with the much played 1812 Overture by Tchaikovsky. I would have loved this performance even more, if it were not for the recorded playback of cannons near the cymbal crashing culmination! To me it seemed a little forced. I was content with the wonderful playing of the percussion section whose bells sounded glorious!

Overall it was a fun concert to see and a great start to the Philharmonic’s new season. I look forward even more to Petrenko’s Mahler in November when the RLPO perform Mahler’s Sixth Symphony, a symphony very close to my heart!