I’m not an expert in classical music. I don’t know much terminology nor can I decipher notation. I listen just because it makes me feel. Some pieces make me feel serene: Allegri’s Miserere, some make me want to dance, Arturo Márquez’s Danzón No. 2, and others just simply take me to a place both spiritually and emotionally that is unparalleled by any other medium! For me, Gustav Mahler’s music does that above any other composer. I may be a bit biased as Mahler was the composer who made me turn away from my ‘pop’ loving years of the 90’s to re-acquaint myself with classical music, but his symphonies especially his later ones from the 5th onwards often have me quaking with a mixture of heightened emotions! 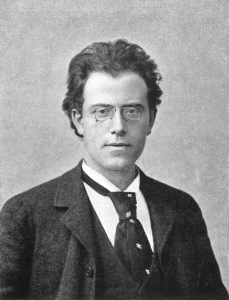 There is joy to be heard in Mahler’s work for example his 1st Symphony bristles with youthful energy. Love is to be found in his 3rd Symphony, not only human love but of nature too. His 9th Symphony is filled with heavy pathos and heartfelt resignation but it is not done in a depressive way, it’s more of an enlightened way, which enables deep soul searching. And then there is the fear and tragedy that punctuates his 6th Symphony and resonates so powerfully in his 2nd!

It is Mahler’s 2nd Symphony, entitled the Resurrection, that I now turn my attention to.

The Royal Liverpool Philharmonic Orchestra performed the Resurrection twice this April, on Wednesday 29th and again on Thursday 30th. I booked tickets for the Wednesday performance. It was almost a full house! We were in the ‘cheap seats’ up in the gallery but we had a perfect view of the brightly illuminated orchestra. 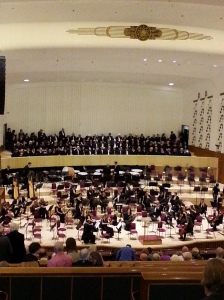 I read the programme notes before the concert and Stephen Johnson mentioned that in the early performances of Mahler’s first three symphonies, Mahler gave detailed accounts of each movement and what ’emotions they aroused.’ However he was not entirely satisfied with having to tell the audience what to feel, what he meant by his music. Mahler said, ‘In my conception of the work I was in no way concerned with the detailed setting forth of an event, but much rather of  a feeling.’ This remark resonated with me and on the night of the concert the feelings became manifest sending goose flesh and shivers all over my body. In fact the performance of the Liverpool Philharmonic conducted by Sir Andrew Davis reverberated deep within my body and I felt the effects long after I had left the hall and stood shivering outside awaiting my bus! Even David who is not a Mahler fan said he felt ‘shivers’.

Sir Andrew Davis is not a conductor I have seen perform before. I know of his reputation but have not seen him conduct live. He is a conductor of much energy, jumping and jigging on the podium with his long tail coat flapping. He did not carry a baton but commanded the orchestra with the shape of his expressive hands. You could see that he really had fun with the orchestra. His years of experience showed. I was surprised to read that Davis was 71 years old he really moved about with the energy of a younger man, I couldn’t keep my eyes off him! 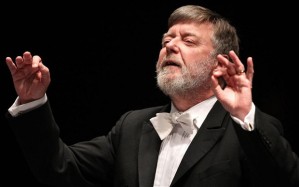 The sound from the orchestra was breathtaking. In the 2nd Symphony there are moments of light hearted fun (the Ländler) and solemn solemnity as found in the Urlicht performed by the Mezzo Soprano Catherine Wyn-Rogers. I could find no fault in her performance, nor that of the choir, however Catherine Jones of the Liverpool Echo said the ‘German text wasn’t as crisp as it could have been.’ The brass for me still played a bit ropey at times (though they got the loudest cheer come applause) and some passages sounded a bit muted in the hall. In her review, Catherine Jones said ‘even the controversial new acoustic, which tends to over-amplify the brass, acted in the work’s favour by adding depth rather than overpowering the whole.’

Alfred Hickling reporting for the Guardian remarked at the ‘frenzied’ attack Davis gave Mahler’s second. I found that the pace was ideal, though brisk it sounded better than some languishing performances of the symphony. Hickling commented mainly on Davis’s appointment as Conductor Emeritus. On the night he was presented with the award and made a speech saying he was ‘deeply touched and honoured’ by the gift and relished ‘the prospect of making music regularly,’ in Liverpool, a ‘wonderfully vibrant city, of which the Orchestra is the finest jewel.’ I’d have to agree. While Davis was making this speech and the orchestra and chorus performed Mendelssohn’s Lauda Sion Op.73 I felt overwhelming pride and respect for the Liverpool Philharmonic, and with this being their 175th year anniversary there is much to celebrate!

My most favourite part of the Resurrection Symphony (apart from Urlicht) is about 10 minutes into the finale. It is the orchestral version of the hymn like chorale that will finish the symphony. When I listen to this part that steadily builds up into a triumphant crash of percussion interlaced with strings and trumpeting brass I always imagine the golden rays of a rising sun stretching its light over a slumbering countryside. Sheep rear their heads from a night of rest and a horse drawn carriage trundles along a narrow country lane. Under Davis’s command the Liverpool Philharmonic played this passage to awe-inspiring heights, some would call it apotheosis, (no recordings I’ve heard come close to it!) The sound filled the entire auditorium! My heart swelled with emotion and I have never heard the orchestra sound so loud, so passionate, so emotional, I indeed had a tear in my eye!

The only jip I had was with the audience, of hissing coke bottles being opened, mobile phones tinkling and the guy behind me humming along to the choir! But none could detract from the performance which culminated in the most rousing finale I’d ever heard!

What would Mahler have thought? If he had heard the mobile phone he would have undoubtedly stopped the performance, like he did when someone had a coughing fit at one of his performances.

Though undoubtedly what Mahler would have thought is of little consequence. Personally, I came away from the hall feeling satisfied. A young couple in front of us talked about how religious the symphony was. I have a feeling Mahler’s Resurrection is more emotional than religious, whether it is a ‘spiritual religious’ or a ‘spiritual emotional’ is another discussion. What is for certain is that there is no ‘judgement’ in Mahler’s 2nd Symphony. Stephen Johnson in his programme notes says that, ‘the 2nd Symphony marks a huge progression from darkness and death through to light and affirmation of life and love.’ There ‘is no judgement…There is no punishment… an overwhelming love illuminates our being. We know and are.’ It can only be a good thing to be all knowing at the end of it all. The end of all things.