I have previously written about the 14-18 NOW Wave and Weeping Window poppy tour. You can read my post on my joy at seeing the Wave at Yorkshire Sculpture Park, here. Both sculptures were designed by Paul Cummins (artist) and Tom Piper (designer). 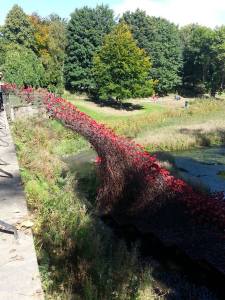 The Wave at YSP

In November, just in time for the city’s Armistice commemorations, the poppies, first seen as part of the breathtaking Blood Swept Lands and Seas of Red, at the Tower of London in 2014, finally came to Liverpool. The Weeping Window at present graces the St George’s Plateau side of the Neo-Classical Grade 1 listed building. I must admit while the sculpture was being constructed I was not overtly taken by the design. After seeing pictures of the poppies at Woodhorn Colliery, it seemed somehow anticlimactic.

However the poppies have grown on me and the city has welcomed them warmly.

The poppies are open to the public from 10am to 6pm daily, with a metal barricade placed around the site after hours, but you can still see them and photograph them. The first time David and I went to see them was around 10pm on a stormy Sunday night. My pictures are not as good as the ones I took of the Wave, but I did have my camera on the wrong setting for night-time pictures (silly me!)

The second time I visited, I went with my Mum while Christmas shopping but once again I forgot to change the setting on my phone, so never got any fancy ones with just the colour of the poppies showing through. It was a dreary day light wise too which seems to be the norm of late. No sooner had the poppies arrived in Liverpool, then there seems to have been nothing but a succession of storms. There hasn’t been many days when the sun has shone! I live in hope that there will be at least one bright weekend, before they leave the city on 17th January 2016, so David and I can visit them one last time.

The 2016 leg of the poppy tour has been recently announced and there could be at least one, maybe two more occasions where David and I will see the poppies. The new sites and dates are as follows:

If you have not had the chance to see the poppies, maybe you will be able to see them at these stunning new locations next year?