I’m back to writing a Sunday Sevens, the wonderful series devised by Natalie at Threads and bobbins.

It was George on his gardening blog, here, who alerted me to this annual initiative, coordinated by Defra. The aim of this week (9th-15th July 2018) is to raise awareness of pollinators and help in sustaining their numbers by planting more flowers, cutting grass less and letting your garden grow wild! 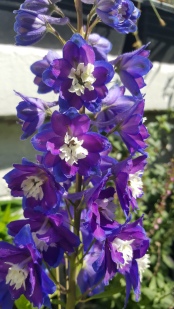 At the weekend we visited Rivendell Garden Centre, Widnes. I bought a beautiful delphinium and also managed to replace my salvia mystic spires. I was so happy, it’s the small things! Among the many bee species that visit the yarden, I spied a male early bumblebee enjoying the cat mint.

Later on in the week David and I had a surprise in the yarden. I had thought our tadpoles, who had seemed happy in our little urban pond, had sadly passed away. We had not seen any in or around the pond for weeks. However on pottering about the yarden David called me over excitedly and pointed to a frog clinging to the wall. I was amazed! One of our tiny tadpoles had grown and metamorphosed into a frog! 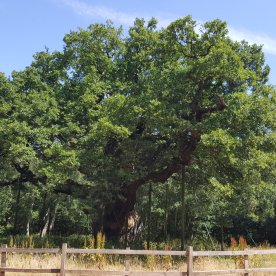 This week David and I visited Nottingham to see their round of robins. (I tried to find the collective for robins, but there were numerous suggestions!) Once we had spotted 17 of the 33 we decided to have lunch at Sherwood Forest. I blogged about the day here.

Book I am reading:

The current book I am reading is The Ice Twins, a suggestion by my mum. She said it was a page turner. It is billed as a psychological thriller, based around the death of a twin girl, the other claims mistaken identity. Set among the highlands of Scotland, the plot follows a family who have been broken by the death of a child and an affair. They relocate to an isolated island in the hope of a new beginning. I doubt very much that will happen!

Have you read this book? What were your thoughts?

I broke the 1000 mile mark on 13th July 2018. I celebrated in typical Christine-style by taking a swim at Llyn Dinas, Snowdonia. I will write further on that adventure soon.

So, that was my eventful week, how was yours?