Day 10: Today’s Close Up Monday is inspired by my short break to The Lake District. Last year, on another trip to the Lakes, I focused on herdwick sheep. Sharon and Louise suggested red squirrels being synonymous with The Lake District, with ospreys a close second. I’ve decided to focus on ospreys for today’s post but don’t worry I will blog about red squirrels next Monday.

The osprey is a large bird of prey, with a wingspan of 1.6m (that’s bigger than me!) They migrate to the UK to breed during the summer and overwinter in West Africa. Their lifespan in the wild is nine – twenty years and are a UK amber species. They can be seen from March to October in Scotland, Wales and the Northern England. Their diet is primarily fish. 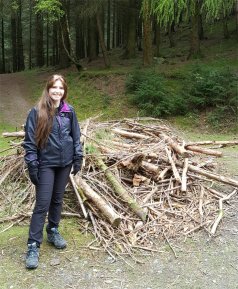 Ospreys become sexually mature from two to five years. Are largely monogamous and prefer tall structures like conifers to construct their nests called an eyrie. When visiting Dodd Wood, Cumbria in 2017 we saw a reconstruction of an eyrie and it was huge! The female lays two to three eggs during April and incubation takes up to a month. The female incubates the eggs while the male provides fish. Once the young have fledged, both parents feed the young for the next two months. Many juveniles die before reaching maturity. Hunting and poisoned food and water are the main threats to numbers of osprey.

There is a lot of webcam footage of nesting ospreys in the UK. While I wrote this blog I came across the webcam for the ospreys at Loch of Lowes, Scotland. Webcams are an insight into nesting behaviours and the rearing of young.

However they can be quite traumatic for the viewer sitting warm and safe at home. While watching I noticed two of the nestlings were being fed and looked strong while the runt lay apart from its siblings and looked to be wasting away. Apparently it had gotten stuck in the twining of the nest and was stood upon by both parents. The chick died not long after, such is the nature of life for a young osprey.

Have you been lucky to see ospreys?

Thanks for reading and stay wild!

Dyfi Project: fantastic resource for information and webcams from Wales.