With a planned walk to Angle Tarn on the itinerary, David and I headed towards Patterdale. We parked the car opposite the Patterdale Hotel and paid the very reasonable £4 for all day. At 9.30am I was surprised at how busy the village was with walkers. With a grey leaden sky and a chilling breeze we headed down the lane and took a left turn onto Goldrill Bridge. We followed signs to the tarn and Boredale Hause. 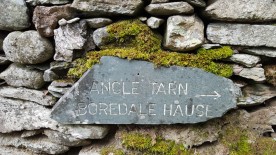 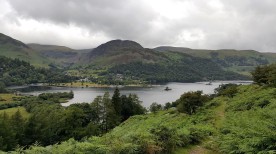 I found information on getting to Angle Tarn rather sparse online, perhaps that was why we took so many wrong turns. What should have been a two to three hour walk ended up being a five and a half hour epic! Things started to go wrong when we reached the first of many forks in the path. We interpreted the walk featured on The How Cottage website wrongly and took a left turn instead of a right. After walking for half an hour, we found that we were heading out onto Place Fell overlooking Ullswater. I knew this was the wrong direction so we turned tail and retraced our route back to the fork, where we took the right-hand path.

After reaching a second fork we took the top pathway. In hindsight it would have been far easier if we had taken the lower path as this would have seen us directly to the mountain pass of Boredale Hause. Instead it was the beginning of our woes as the top path branched off before Boredale Hause and we ended up traipsing across mossy blanket bogs, soaking our tired feet in mud and water. I soon grew fearful as we seemed to be heading in the wrong direction to Angle Tarn. The sky darkened broodily causing my sense of isolation to increase. With map skills at a minimum, GPS not functioning properly, and David doggedly wanting to see what was at the end of a steep path, we walked for further than needed. Instead of heading south we headed east and ended at a cairn overlooking two valleys. However we had inadvertently bagged another Wainwright, this time Beda Fell. With my mood as morose as the weather I didn’t take a picture. Thinking back the scenery was impressive, I just wish that it didn’t look so desolate. I was not enjoying myself out on the fells!

Almost close to tears and wanting to give up, we retraced our footsteps back down the path. Some of the pathways were not clearly defined, but (luckily) we finally ended up at Boredale Hause and its cairn. There were numerous paths leading from the cairn and one that was sign posted with red flags (the coast to coast walk). We followed this path which seemed popular with other walkers. It was also aiming in the right direction for Angle Tarn. I had not given up totally of seeing it. The well defined path was gravelly underfoot with sheer drops in places. I didn’t look down! There were however stunning views of Brothers Water nestled among the Hartsop Dodd fells. 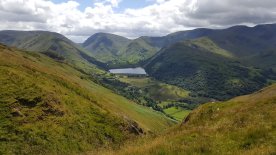 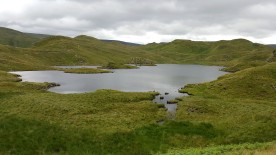 We had been walking for three hours, our feet had started to blister when I saw David ahead of me jump for joy! Over a hill we spotted the dull tinge of cloud reflecting water. Angle Tarn spread out before us enticingly with its two islands and spit. We stiffly walked to the promontory and found a little cove where we set up camp and had lunch. I was too tired to be happy. I had found the whole experience underwhelming.

Even though I felt cold I decided to continue with the planned itinerary and go for a swim. It ended up more of a dip as I felt so exhausted! Terence said that the water temperature was 15°C. From our cove the main island was only a few metres away. Once in the water I decided to swim over and explore. I had always wanted to swim to an island and Angle Tarn’s island was not too far away. 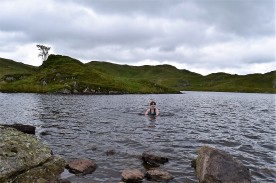 After my swim, we returned to Boredale Hause and thankfully our journey back to the car park was uneventful. Our descent took two hours. On the way down, David spied a huge golden ringed dragonfly at the side of the path. Out came the lenses and he managed to snap a great photo of it!

In calculation, we had walked for over five hours, ten miles in total and my Samsung Health clocked a whopping 26,000 steps! It was an eventful day, one I won’t forget in a hurry.

Have you walked around the fells of Patterdale? What were your impressions of the area?