Wow! What a year it’s been for wildlife spotting!

During 2022 I’ve been using David’s old Nikon DSLR and have been able to capture some wildlife not seen before.

Who would have thought that in January a Chiffchaff would be the nature highlight of the month!

A wildflower called ivy-leaved toad flax was found growing outside our front door. Though some see this beetle as a pest, it was lovely to see the iridescent colours of this Lavender beetle brighten up the yarden, while a day flying moth, angle shades was found resting on our front wall.

It was another year that batty graced our yarden with their presence hunting for moths and midges. It always makes me smile when I see Batty flitting around the yarden.

As we continue to garden for wildlife, pollinators such as ashy mining, hairy footed flower and white tailed bumblebees all visited the yarden this year.

I bought a discovery apple tree in March and it flowered and bore fruit in its first year!

Our first ever sighting of this Hummingbird Hawk Moth, looking for nectar was one of the best highlights of 2022!

I spent a lot of time outdoors for #30DaysWild and visited Brocholes and Lunt Meadow Nature Reserves, where we spotted dragonflies, such as black tailed skimmers and four sport chasers. This white throat perched nicely for a photograph, and there seemed to be lots of butterflies about. David got some great photos of the resident Roe deer and fox at Brockholes.

It was yet another year of wonderful wildlfowers springing up wherever there was an empty patch of land.

In August we spent a week holidaying in Scotland. We visited Loch of the Lowes, where they have nesting Ospreys. On arrival we heard the young calling for fish and two hours later were lucky enough to see both young on the nest.

Our boat house was on the shore of Loch Tay and I went swimming in the rain and during a night swim, had bats circling and hunting around me.

From the forest around the boat house, a lone Tawny Owl hooted solemnly.

The sparrowhawk visited the yarden again!

For my birthday this year, we visited RSPB Leighton Moss and finally got to see the bearded tits and even a cute, tiny goldcrest.

There has been some lovely sunrises and some astounding sunsets.

Clouds have been one of the star attractions in 2022. These mammatus clouds loomed ominously as we drove home from scotland.

To finish off it’s been a year of many Rainbows.

How wild has your year been?

Yet again, David and I have had a simply wonderful bank holiday weekend! 😀 Our plans were fitted around the changeable weather on Saturday, were we spent time visiting family. With better weather forecast for Sunday, we headed up to the Lake District for a spectacular day out (post to follow)! Monday, the hottest day of the year (so far), dawned bright with not a cloud in the sky. Our plan was a visit to the very popular Pennington Flash, with Riley in tow. 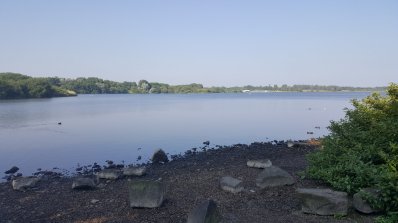 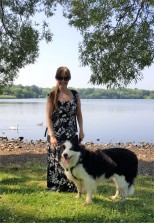 Christine and Riley at Pennington Flash

At only 40 minutes drive from Liverpool, Pennington Flash is a local nature reserve in Leigh. Boasting a 70 hectare lake, bird hides, bridle paths and even a golf course! Pennington Flash seems to have it all. 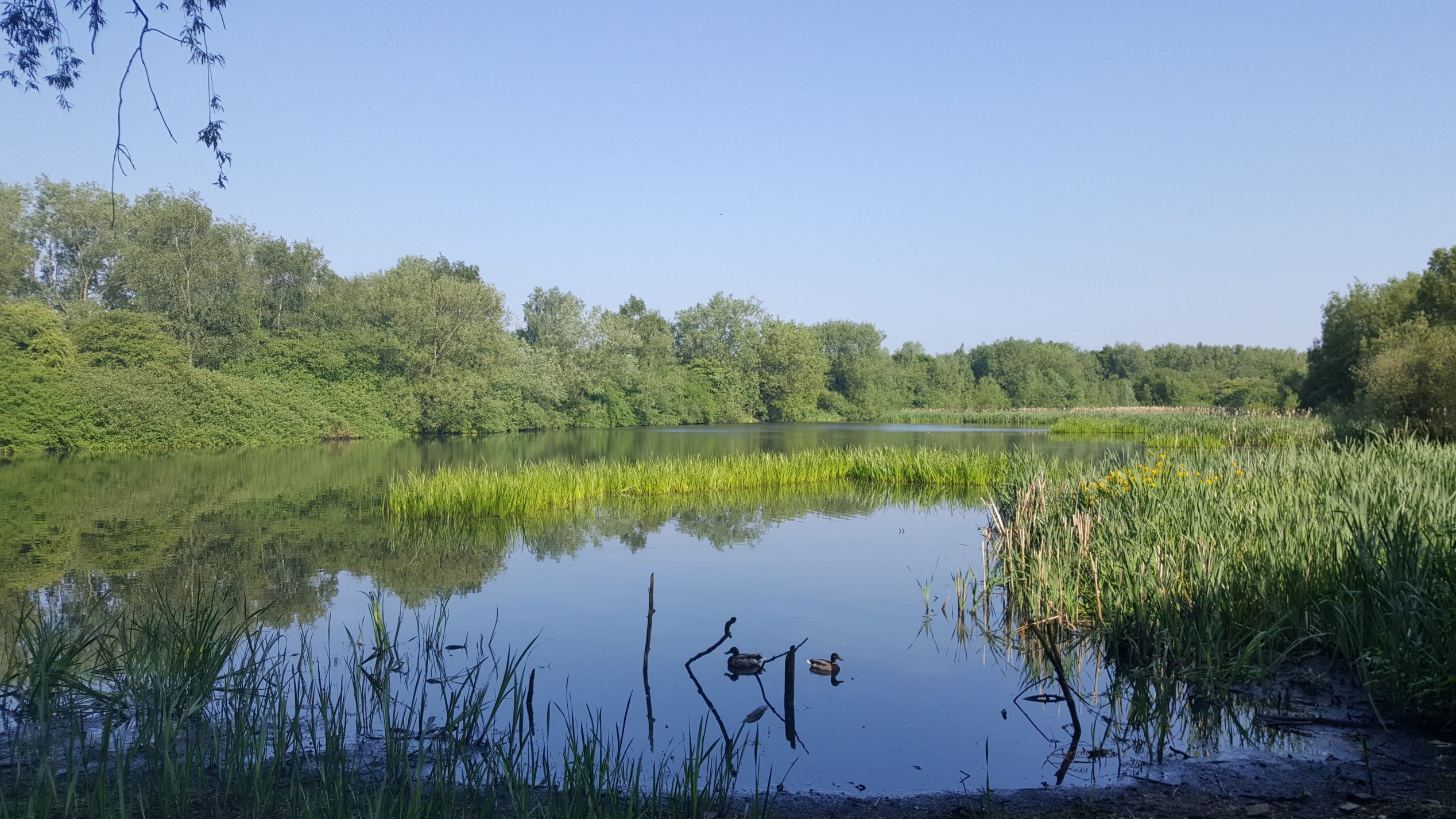 View from a hide

On recommendation (as it gets very busy), we arrived early, paid £1.20 (which is for all day parking) and took a leisurely 3.5 mile walk around fens, woodland and meadows. Riley seemed to enjoy himself, even taking a short dip in the flash (a term for a lake derived from mining subsidence). 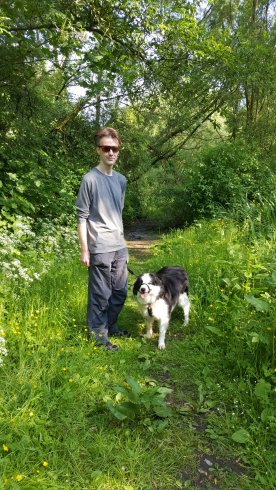 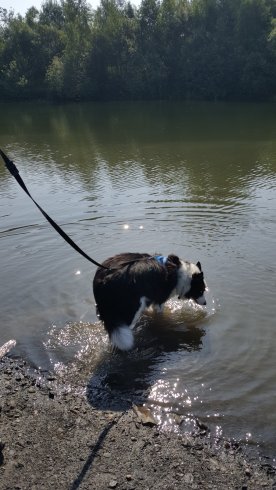 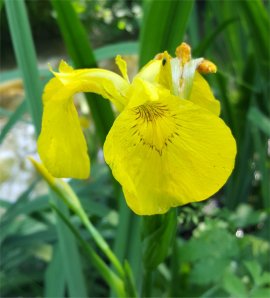 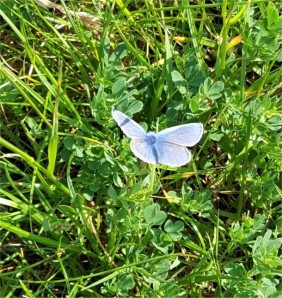 I enjoyed the walk as much as Riley and hope to revisit in future. Perhaps a more detailed visit is in store for 30 Days Wild?

Have you visited Pennington Flash? If so, what were your impressions?

Still nursing a bit of a hangover from 30 Days Wild. Our forays into nature have continued.

Sunday dawned bright and cheerful. While David got up at 7.30am, I turned over to snooze for longer. However five minutes later David came charging back into the bedroom, ‘we’re going out, he said. We had been debating the previous evening whether to stay at home or visit a Wildlife Trust nature reserve. It all depended on the weather.

‘Shall I get up now?’ I mumbled sleepily. I guessed the weather was favourable.

‘No, later.’ So I snoozed until 8am when I got up for breakfast. We were out of the house by 9am! We drove for an hour to Ormskirk and Mere Sands Wood Nature Reserve and spent the next three hours walking along woodland paths and gazing over lakes. 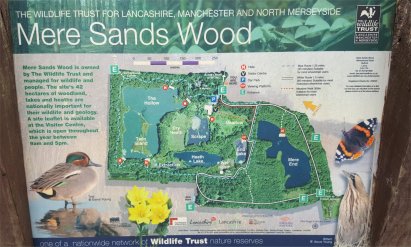 On our bimble we saw many fluttering red admirals and a wonderful comma butterfly. Flashes of blue damselflies darted about and brambles were covered in hundreds of bees and hoverflies. The woodland scented air was filled with the hum of insects and the chatter of birds. Calls from great tits, wood pigeons and dunnocks graced the airwaves. 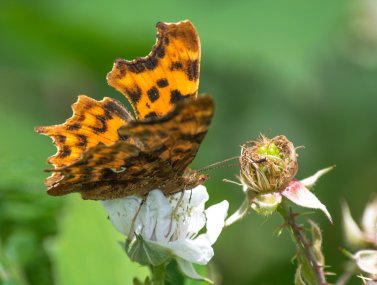 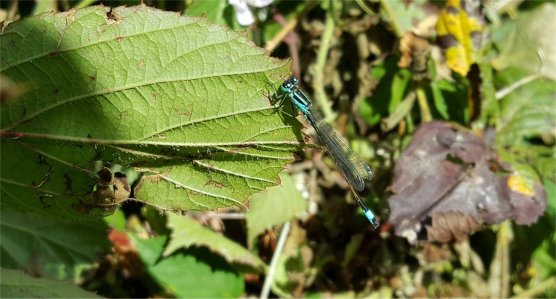 Thanks to a kind gentleman, we even spied a great crested grebe during a visit to one of the hides. I think David has captured the Grebe beautifully. 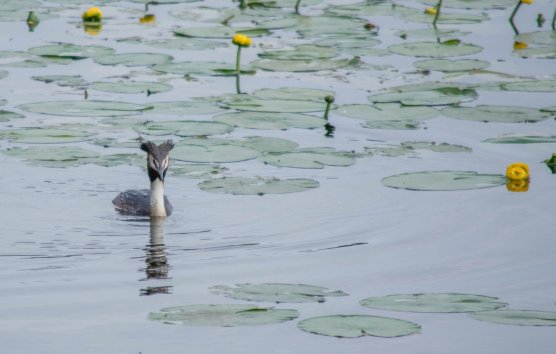 The great crested grebe is a conservation success after being nearly hunted to extinction for its plumage during the 19th Century. The grebe has adapted to the aquatic lifestyle and is cumbersome on land and in the air, preferring to dive under water to escape or hunt. During spring they have an elaborate courtship dance of fluffing their crests and mirroring each others’ head twists.

We walked a total of five miles around the three main paths of Mere Sands Wood, and visited a meadow with selfheal, where small white butterflies flittered over head. It was a peaceful way to spend a Sunday. 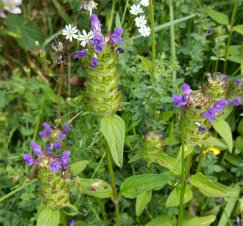 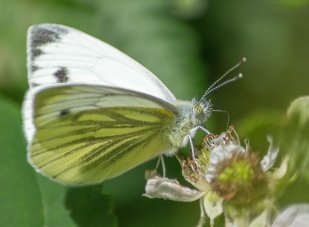 As the day progressed and the sun burned down the reserve and car park grew busy. There is a £2 charge to park all day with a licence plate recognition camera. There is also a visitor centre with literature and gifts.

Have you ever visited Mere Sands Wood? What is your favourite Wildlife Trusts nature reserve?