‘…music be the food of love, play on,’ says Orsino from William Shakespeare’s Twelfth Night; or What You Will!

This production was the much anticipated opening play of the ‘new’ Everyman Theatre, Liverpool.

*Spoiler Alert: If you are intending to go to see this play then don’t read on…*

It also happened to be one of my favourite Shakespeare plays, so I just had to go! I had booked the tickets since November 2013 and grown increasingly excited as time drew closer to the event, the 21st March 2014!!

Alas that date has now come and gone too readily but the memory of seeing the first performance in the new Everyman leaves me feeling warm and fuzzy!

The building itself has an organic feel to it, perhaps something to do with the bare bricks featured in the walls? I read on their website that they had kept 25,000 bricks from  the old Everyman and interposed them into the new building. The new Everyman looks crisp and clean and bright!!

On our arrival, (as I dragged David along with me) we were welcomed by one of the ushers who was smiley and helpful, pointing us to where we should go, (the theatre was upstairs!). I bought a programme, and at £3.50 seems to be the going rate nowadays.

We made our way into the auditorium and found that our seats were on the stage! I knew the Everyman had retained it’s thrust stage, (where the audience  is seated around three sides), though I thought it would be a bit like the Crucible in Sheffield, but no! The entire front row sits on the boards of the stage!! A little too close to the action for comfort? We found that that was not the case, I think we had the best seats in the house!!! 🙂 The cast utilised the space on the stage really well and we could see all that went on, not like when I went to see The Winter’s Tale in Sheffield and found that a lot of the cast stood with their backs to the front!

Twelfth Night seems to have been an inspired choice for the first performance, for a reborn theatre in a city ankle deep in culture! The play’s themes of love, loss and reunion is interlaced with an abundance of mirth!! I don’t think I have laughed so much during a performance of a play, as I did during Liverpool Everyman’s Twelfth Night! The whole cast were top notch! There were the heavy weights of TV and theatre, Matthew Kelly (Sir Toby Belch) and Nicholas Woodeson (Malvolio), but there were also, (obviously) a lot of talent from the region. With a very able Jodie McNee as a convincing Viola, Pauline Daniels as the impish Maria and Paul Duckworth who for me was arresting as the fool, Feste! Not just because he pranced around camply in heels and make-up, but because his character seemed to grow in stature throughout the play! Natalie Dew was entertaining as Olivia, her comic timing was exquisite and Adam Keast as Andrew Aguecheek reminded me of Rik Mayall in Bottom!

The stage was relatively austere. I liked the shards of glass on the floor, perhaps mirroring the different aspects of the self? I think Twelfth Night looks at the self and persona and how we project that to other people. It is highlighted by Viola’s words, ‘then think you right: I am not what I am!’ Hanging from the gantry there were orchids in flower pots and at the back of the stage there are revolving frames where foliage peeked out.

The performance even had a pool of water in the stage floor where Viola and the captain sprung out breathlessly at the beginning of the play. A nice touch, however I think for the rest of the performance the actors were aware of the perils of falling into it. (Perhaps they could have covered it up?) Even those seated in the front row, (one even with a dislocated toe) were weary when the cast members strode between them and the pool and at other times were put on guard when Sebastian (Luke Jerdy) rode around the stage on his tandem! That said tandem almost caused a catastrophe in the final scene where Viola and Orsino, riding into the ‘sunset’ almost careered into the pool! It spouted laughter from the cast and audience alike and highlighted the knowledge that the actors all seemed to revel in the merriness of the play.

For me the first part before the interval was more enjoyable than the second. The second being more mischievous in the mockery of Malvolio. Thankfully there were no power cuts that marred previous performances! The comic element in the first part seemed riotous at times. You could tell that this was the first production of a brand spanking new theatre! With the cast singing (the songs were given a modern lilt), The 12 Days of Christmas, throwing a big present for the audience to catch and the offering of treats! It all seemed very celebratory! Even one member of the audience was caught up in all the mirth as before him was a trolley laden with jellies! Malvolio (Woodeson) shouted to the man ‘get your hands off the jellies!’ The audience member took it all in his stride and even hid his head in his shirt for shame! There was much fun and laughter to be had by all and I seemed to sit throughout the three hour plus performance with a constant smirk on my face! Even Toby Belch (Kelly) and Andrew Aguecheek (Keast) joined the audience at one stage. There were empty seats next to a lady two seats from myself. Kelly and Keast seated themselves merrily besides her asking whether the play had ‘started yet’ and it would be better once, ‘the drunks had arrived!’ The ad-lib nature of this scene was hilarious!

The play ended with Malvolio spitting out his curses for revenge, Viola and Sebastian were reunited and the lovers joined with their rightful partners! The finale was again very joyous with the cast dancing around the stage to party music. The audience clapped along and the culmination was streamers popping loudly and balloons falling from the heavens. One landed in my lap and as the cast walked off the stage, I reached out for another balloon bobbing in front of me. I forgot the seats retracted and fell back on my bottom laughing loudly!! David couldn’t help but laugh too and we walked out of the theatre, thoroughly entertained and with two balloons! 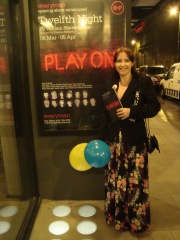 It was the first play in the new Everyman and returning home, it was to ‘our’ home that we returned and not our parents. There had been many firsts that night!

With Malvolio’s words ringing in my ears… ‘some are born great, some achieve greatness, and some have greatness thrust upon ’em.’ I wonder whether that is the reincarnated Everyman’s will, to achieve just that!