On Sunday David and I went to the Royal Liverpool Philharmonic to hear a recital of Rachmaninov’s 3rd Piano Concerto, performed by Nobuyuki Tsujii, and conducted by Vasily Petrenko.

The hall has just had a major facelift. It has been some 20 years since the last overhaul and everything looks fresh and newly painted. The reception is of an aquatic blue and the auditorium painted brilliant white, with new lighting and a new stage. 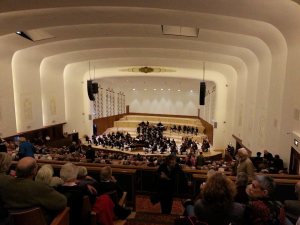 However it’s quite noticeable, the new against the old. I would have preferred new upholstered chairs, or at least carpets for the audience, the seating areas look a little dated in comparison.

From Thursday’s performance called ‘Winter Daydreams,’ where Nobuyuki Tsuji played Prokofiev’s Piano Concerto No.3, people noted that the acoustics in the hall were different than previously. I noticed the same today. The strings, especially the cellos/bases during the Rachmaninov seemed rather muted. Whether this has anything to do with the pale wood that comprises the stage is debatable. However the sound from the Tchaikovsky (1st symphony) seemed to dispel any previous issues.

The concert opened with Nobuyuki Tsuji‘s performance of the 3rd Piano Concerto of Rachmaninov, touted as one of the most technically challenging to play. Tsuji’s performance was virtuosic and touching. The lyricism in this piece is breathtaking, but for me it doesn’t touch the emotion carried by it’s predecessor. Personally I would have loved Tsuji to have performed the Rachmaninov Piano Concerto no.2 which he played triumphantly at the BBC Proms in 2013. However I did enjoy the Rachmaninov 3, the finale was exhilarating.

It was lovely to see Petrenko guide Tsuji on and off the stage to the appreciative applause. There was even a hug between them after they left the stage for the final time.

The afternoon was filled with encores as Tsuji came back to the stage to perform Rachmaninov’s Variation 18 of a Rhapsody on a Theme of Paganini which was beautiful. I could have listened to a whole concert with Tsuji playing, so I hope he comes back to the UK and Liverpool again soon! The only complaint I had which has also been reiterated by other reviewers was that at times the orchestra seemed to overpower the virtuosity of the soloist. Perhaps it is something the Liverpool Phil can rectify for future concerts?

The second half of the concert was Tchaikovsky’s 1st Symphony, ‘Winter Daydreams.’ It is a symphony I am not familiar with. I know a lot about Tchaikovsky’s most popular works and his later symphonies but not his earlier ones. It was a neat performance by the Liverpool Philharmonic, but for me it was just not my ‘cup of tea,’ even David nodded off at one point!

With the hall still having major reconstructions, the side entrances were closed, meaning that everyone from the circle and rear circle had to filter out via one exit. People stated ‘what would happen in a fire?’ but I am sure the hall’s evacuation plans would cover this. I can’t see them opening for the public with no emergency contingencies in place.

The concert was a ‘sell out’ and the audience seemed happy with what they were offered. I know David and I went home feeling satisfied. I can’t wait to visit the hall again for the Valentine’s concert and in April for Mahler’s ‘Resurrection’ Symphony (No2). That performance will definitely test out the new acoustics of the hall and we’ll also see where the choir will be situated on the new stage!

They are lots of exciting events to look forward to and the Liverpool Philharmonic looks like it is embarking on an enthralling 175th anniversary season.