It was the first outing of my orange tow float, and to celebrate this momentous occasion I walked 1.5 hours to Stickle Tarn, in the Langdales (and 1.5 hours back) to test it out!

On a particular down day I decided that my swim kit just wasn’t complete without a tow float. I had read that COWS who swim at Derwentwater had asked swimmers to don a tow float so tourist boaters could see swimmers. For the sake of safety I decided to buy a Lomo tow float with pouch (other brands are available). It was only £19 including postage and arrived not two days after I ordered it. I was very happy with my purchase and was excited to test it out.

So when an impromptu break to the Lake District beckoned, the tow float came with me, along with a brand new Regatta rucksack. All this swim kit needs to be carried and the rucksack I had just wasn’t adequate. 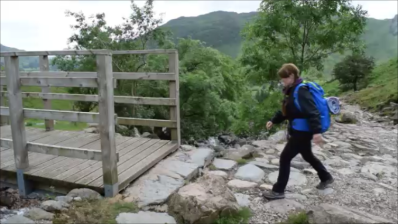 Our walk started from The National Trust Stickle Ghyll car park off the B5343 (nearest postcode LA22 9JX). David and I, didn’t know how long it would take to walk the route with a swim and picnic, so we paid for all day parking at £7.00. While David calibrated his steady cam I sat and enjoyed the woodland birds visiting the feeders a NT volunteer had put up. I even saw a yellowhammer but was unable to photograph it due to the poor zoom on my S6!

We followed a path from the north end of the car park. Passed a gate which traversed towards Stickle Ghyll and a path that had been stone pitched, that led steeply upwards. There were many plunge pools that looked inviting along the route.

The path towards Stickle Tarn 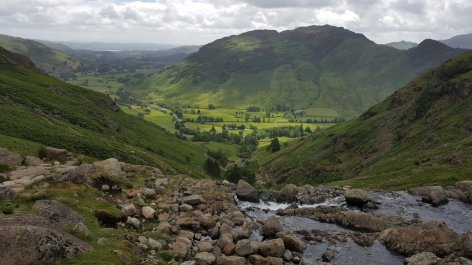 We crossed a bridge which overlooked a hydroelectric scheme, that harnessed the power of the ghyll, from there the path steadily gained height. There were many scrambles which I wasn’t too happy about. However I manged to scale the rocks and overcame the stepping stones across the turbulent ghyll, before we took the final steps towards the tarn. 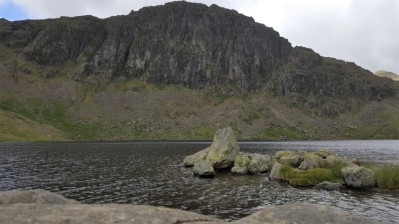 The summits of Harrison Stickle, Pavey Ark and Pike O’ Stickle once formed the outer rim of a volcano. Many a climber has enjoyed ascending Jake’s Rake. I preferred to sink my body into cold 14°C waters. It was an ancient volcano after all!

I lasted about 15 minutes in the water before I decided to call it a day. While I looked the part, my technique let me down, with turbulent waters I struggled. The water was cold, and the wind that chopped the waters was equally as cold. I suffered badly from shivers on land afterwards. The tow float had a good swim and remained visible. Also the pouch with dry bag kept my phone dry (which I used to measure my swim), even after a capsize! David kindly filmed me swimming, the result can be seen above.

Once warmed up and had lunch we took the descent back to the car park. However we missed the boulder crossing at the ghyll and ended up looking for a way across further down. David found a site he thought was broach-able. For his long legs it was, but I failed in this leap of faith and hit the side of the ghyll. David reached for my left arm and as he kept a hold of me, to stop me from falling down the waterfall, I felt my tendons twist. I managed to climb onto dry land, having taken an impromptu dip in the ghyll. My boots were soaked and I was in the water up to my knees. I had just got dry, and now I was wet again! Add to that a throbbing wrist and I could be forgiven for giving up on the remaining plans for the day. However I did not. I fought the injury to go on a second swim that day.

I am happy to report that the remaining journey down the ghyll was uneventful. Thankfully there were free toilets at the car park and I managed to change into fresh swimwear.  I will write about about my second swim of the day in my next post.

Have you visited Stickle Tarn, or had an unexpected swim? Fallen into fast flowing water?