Nestled next to the A593, Yew Tree Tarn is one of the most accessible tarns in the Lake District. There is a rather expensive National Trust Car park across the road, (£6.50 for four hours) or if lucky free lay-by parking alongside the tarn. David and I have past this small tarn many times, journeying from Coniston on our way north to Keswick.

I’d planned on a longer walk to Holme Fell before testing the water temperature of Yew Tree Tarn. However the walk didn’t pan out, due to time constraints and being stuck in slow moving traffic around Ambleside. It was decided that after David befriended the local Belted Galloways, I’d take a dip in Yew Tree Tarn before taking a walk around the popular Tarn Hows. 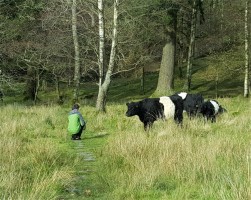 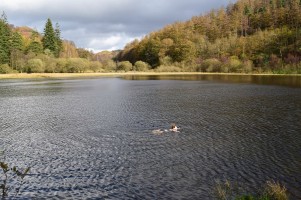 On our walk around Yew Tree Tarn we found a bench overlooking a shingle cove which was a good entrance into the water. Terence registered a cool 12°C, but it felt much colder with the wind that always seems to appear every-time I strip off to my swim-suit! I hadn’t been in the water since August (Llyn Cau), which was probably why the cold affected me. I admit my mindset wasn’t on wild swimming that day, so I cut the swim short after five minutes.

After struggling to get dry and dressed, David and I headed towards a walk around the picturesque Tarn Hows via the Glen Mary ravine and Tom Gill. If there had been more time, I probably would have been tempted to take a dip. In hindsight both tarns I think would benefit from an early morning or evening visit during summer-time. 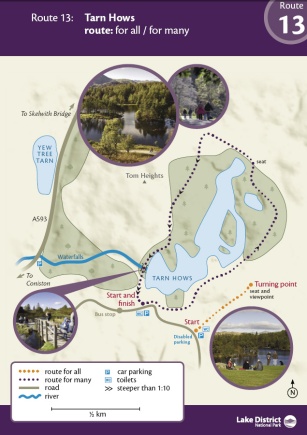 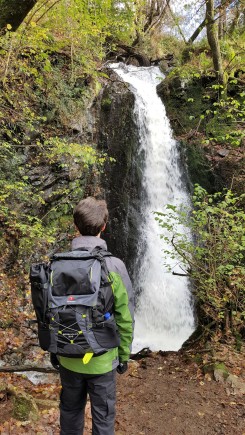 Tarn Hows is partially man made. Three tarns (The Tarns) were joined together in the 19th Century, lending a very park-like feel to the area. In the 1920’s Beatrix Potter bought the area before selling to the National Trust. You can see why the tarn is so popular today, as the two mile low level path is ideal for all abilities. However for David and I, Tarn Hows didn’t have the special appeal such as Blea Tarn or Wast Water has. Perhaps we are being unkind?

Have you visited Tarn Hows? If so what were your thoughts? Have you been tempted to take a wild swim/dip?

Hoppy has come back to us! Five years ago we helped her with string around her feet and she visited every day since then. Yesterday we noticed she was lethargic and @david_evans95 managed to catch her today. Hope we can help her once again. Love you Hoppy! ❤😍 #pigeonhealth #pigeon #pigeonsofinstagram #hoppy